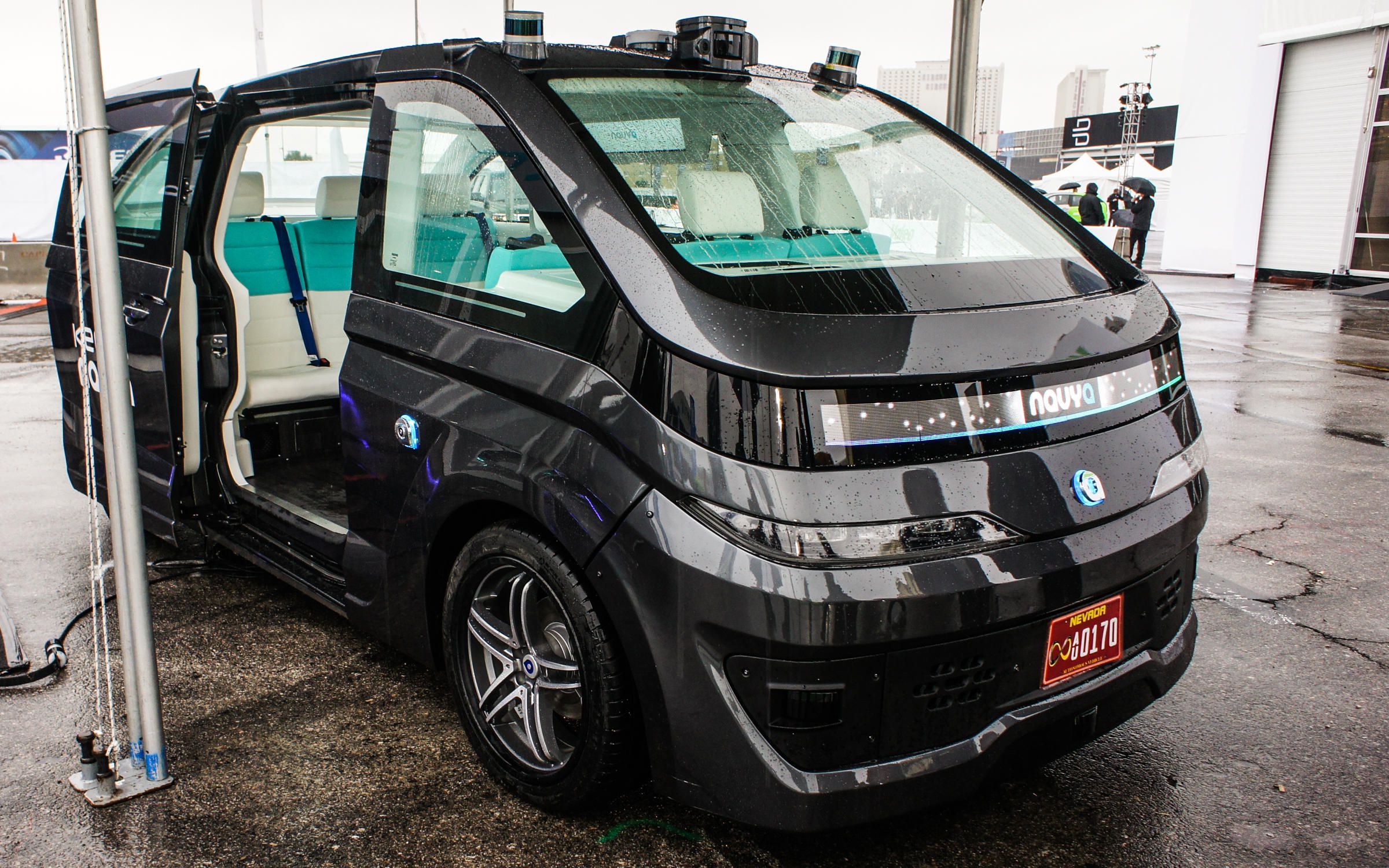 You’re not likely to buy a self-driving car anytime soon, but you may end up riding in one. Navya is already deploying its Autonom Shuttle for public transportation in select areas around the world, and showed off its Autonom Cab at CES 2018, a newer vehicle which will see public tests this year.

The Autonom Cab, designed for ride-hailing services, leaves out the driver controls entirely in what is known as a Level 5 autonomous vehicle.

Meeting with Navya President Christophe Sapet in the Autonom Cab, its seating arrangement and spare interior created a comfortable space, making it easy for passengers to converse. Sapet emphasized the small size of the company, at just 180 employees, and how much it has accomplished.

The meeting was supposed to include a ride in the Autonom Cab, but Navya canceled that part of the demonstration due to rain. Sapet said that the car works fine in the rain, but this preproduction version’s body might leak. A production version would be weather-proof.

Self-driving cars, being developed by automakers, startups, automotive equipment suppliers and big tech companies, have the potential to prevent of mitigate accidents that cause over a millions deaths worldwide each year. They could also make a big difference for an increasingly urban populace that becomes less likely to own personal cars.

Navya claims that over 260,000 people have already ridden in its Autonom Shuttle, an earlier self-driving vehicle designed to drive a prescribed route, similar to a municipal bus. The Autonom Cab is designed to be more flexible, taking people where they need to go in an urban area.

The interior seats six in two seating rows that face each other. Impressively, the Autonom Cab doesn’t look any bigger than most five-seater SUVs, and is smaller than many. Yet the passenger space feels much roomier. A touchscreen in the Cab lets passengers interact with the vehicle, yet most requests are made through a smartphone.

At CES, Navya Director of Marketing Nicolas de Cremiers demonstrated how a passenger might open up a ride-hailing app, then specify whether he was looking for a shared ride or a private taxi. As in most ride-hailing apps today, the app shows when the Autonom Cab arrives. The Autonom Cab greets the person who summoned it with a colored light matching one on the app, helping to distinguish it from other cars or Cabs that might be on the road.

The Autonom Cab’s electric drivetrain isn’t designed for personal car driving dynamics. Its top speed is 55 mph, and it is designed to travel comfortably at about 35 mph, suitable for most urban and suburban areas. Its 22-kilowatt-hour battery pack lets it operate for about 10 hours as a robo-taxi.

The Autonom Cab senses its surroundings with 10 lidar units, six cameras and four radars, a very robust array. In addition, two GPS units help it understand where it is in the world. As with most self-driving car technologies, the Autonom Cab stores a high-definition map, comparing what its sensors see to that map to get its precise location in relation to lane lines, curbs and traffic infrastructure.

Sapet said the Autonom Cab costs about $250,000. However, as a public transport vehicle, that amount amortizes reasonably well when you consider how many hours a day it will operate and how many passengers it will carry.