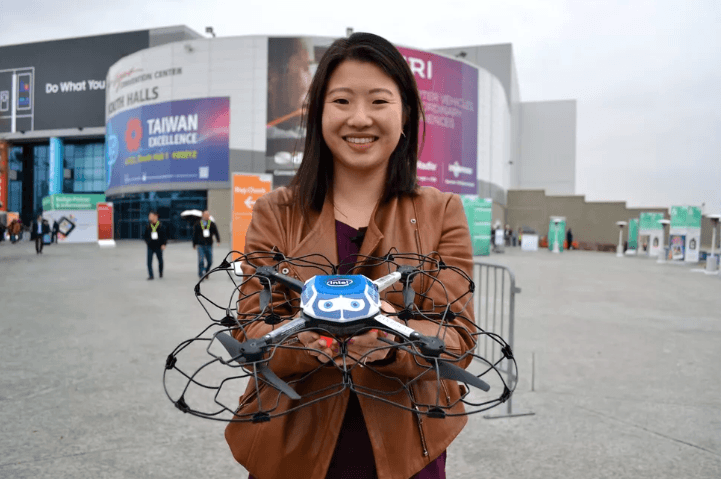 After the lights went dark in the Monte Carlo resort’s Park Theater, a buzzing army of 110 small drones with flickering red lights started to float up to the ceiling from offstage.

While Kygo‘s dreamy pop song “Stargazing” played, the drones pulled together into pulsing, swirling clouds that reached into the audience, at times forming rotating stars or shimmering sheets of light.

That was the finale of Intel’s keynote event at the CES tech show last month in Las Vegas, where CEO Brian Krzanich introduced to the world these hand-sized Shooting Star Mini drones, the next generation of drones Intel’s made specifically for drone light shows.

The chipmaker made a splash with its bigger sister Shooting Star drones at last year’s Super Bowl, with an array of 300 drones turning themselves into an American flag in the sky behind Lady Gaga during a pretaped portion of the halftime show. The new younger sibling Mini drones were built to perform light shows indoors, part of Intel’s plans to bring this new form of entertainment to many more places this year.

“This is a new way to tell storytelling in the sky, where you have a blank canvas, like a night canvas in the sky,” Natalie Cheung, Intel’s general manager of drone light shows, told me a few hours before the keynote presentation. “It’s sort of like digital fireworks.”

Cheung said she sees the light-show drones as offering a lot more than some passing distraction at a football game or concert. Intel plans to apply what it’s learning from light shows to industrial uses for its other drones, like coordinated drone search parties and inspections of cell towers. More broadly, Cheung views the light shows as a way of introducing drones to the general public in a more positive way, as a balance against controversies like delivery drones potentially taking away people’s jobs.

“We’re able to change how people are looking at drones,” she said. “They see it as a fascination.”

Cheung joined Intel in 2011 after graduating that year from the Massachusetts Institute of Technology with a master’s in electrical engineering and computer science. After a rotational program for engineers, she landed an opportunity as a research analyst for the CEO.

That led to a chat in the hallway with Krzanich in 2015 about using 100 drones to create the Intel logo in front of a company building.

“We didn’t know the answer at that time, but said OK, I think we can do this. What do we need to do to make this possible,” she said.

In November of that year, Cheung helped organize a team in Germany that flew 100 Hummingbird drones made by Ascending Technology, snagging a Guinness World Record for the most drones that were airborne simultaneously.

“I realized there that we were just scratching the surface and we had just gotten into something that was much bigger than I expected,” Cheung said with a Shooting Star drone sitting by her during our conversation.

The hardware of a Shooting Star is fairly simple. The drone weighs about as much as a volleyball, is made of foam and plastic, and carries an LED payload that can flash red, green, blue or white. It doesn’t have cameras. The Shooting Star, flying outdoors, is guided by GPS, and the Mini drones use a similar tech called the Intel Indoor Location System. And, no, neither drone is available for sale to the public.

Intel built software to program groups of hundreds of these drones that can be operated by a single drone pilot, helping it create intricate moving shapes and logos for festivals, sporting events and movie premieres all over the world.

Each show can take months to plan, needing to coordinate the aerial animations, local permits and on-site preparation. To ensure safety, the drones are programmed with two geofences to protect the audience and with multiple emergency protocols, Cheung said.

Close to the Sun Review – Not Close Enough