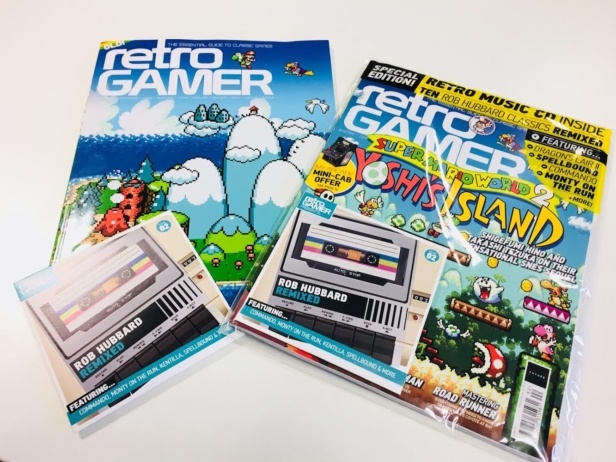 Issue 192 of Retro Gamer is available to buy now from all good newsagents and My Favourite Magazines, and we’ve teamed up with C64Audio.com to deliver a special package for our readers. Each copy of the magazine comes with a CD full of Rob Hubbard remixes – the best of the game music legend’s Commodore 64 work is represented here, with tunes from the likes of Monty On The Run, Commando, and Dragon’s Lair II remixed and reimagined by the likes of Matt Gray, Uncle And The Bacon and even Rob himself (see the full track listing below). Inside the magazine itself, you’ll also find an interview with Rob talking about Project Hubbard and the upcoming 8-Bit Symphony concert, due to take place on 15th June 2019.

That’s not all though, as you’ll have noticed that our cover story is on Yoshi’s Island, one of the greatest 2D platform games ever made. Nintendo’s Takashi Tezuka and Shigefumi Hino reveal the development process behind the SNES classic, from the initial decision to avoid another Mario game to the game’s beautiful hand-drawn style, and of course the use of the SuperFX 2 enhancement chip.

There’s plenty more to see elsewhere in the issue. Former Ocean Software artist Mark R Jones tells the story of his first month at the company in his own words, with unseen sketches and photographs from the time. Our regular Making Of features examine the cult C64 classic Space Taxi, Lucasarts’ eccentric management sim Afterlife, EA’s dangerous extreme sports title Skitchin’ and the PlayStation ninja classic Tenchu: Stealth Assassins. We also catch up with the Road Runner in an Ultimate Guide, and look back at the evolution of Head Over Heels with Jon Ritman and Bernie Drummond.

That’s not all, either. Rebecca Heineman discusses her decades in the games industry in In The Chair, we take a look at the Amiga CD32 in our Minority Report, and Julian Gollop tells all about the history of his strategy studio Mythos Games. The long-awaited ToeJam & Earl: Back In The Groove is reviewed, and of course the magazine features the usual selection of Retro Revivals, news, columns and guides. And if all of this sounds like something you want to be a part of long-term, we’ve got a great offer of a free mini arcade cabinet for new subscribers.

Close to the Sun Review – Not Close Enough