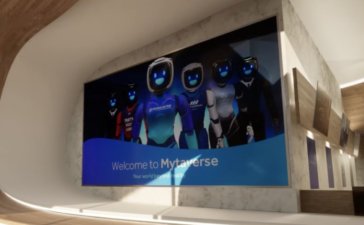 Mytaverse was founded during the COVID-19 pandemic and has seen its fair share of remote events and virtual work solutions since then. About this time last year, the company hosted a Pepsi-led event focused on innovation that brought over 300 representatives from Google, Adobe, IBM, Salesforce, Amazon, and others into the platform for the first time.

“Our company is growing rapidly and we’re getting a lot of traction,” Inside Sales Manager, Robert Mc Illece, told me during an in-world interview and platform tour.

The platform isn’t just about remote presence. They acknowledge that the metaverse will never replace in-person. More importantly from the business angle, the metaverse has to replace in-person a lot less frequently now than two years ago. Fortunately, the platform has a way with virtual models – which might have more lasting and varied staying power than virtual people.

The platform has special tools for displaying and viewing virtual models. These can be digital collectibles or digital twins. Companies can bring their own models, or work with the Mytaverse team to build models for use in their applications.

The digital twins aren’t just viewable, they can also be made to be configurable in real time. Over the course of the interview, I change the exterior colors of model cars – and the interior colors of a model jet while standing inside it.

All of this is made even more impressive by the first major update to the Mytaverse platform, partially funded by a recent $7.6M seed round. The update brought Unreal Engine 5 to the platform (Did we mention that Unreal is a tech partner?), along with a tidy integration with the cross-platform avatar engine Ready Player Me.

Navigating Within the Platform

“We’ve been asked for a long time to incorporate human avatars. We used robot avatars for a long time,” said Mc Illece. “We were going to use Metahuman, but it’s too heavy.”

Those robot avatars are still available for users who don’t already have Ready Player Me, or who don’t want to take the time to make one on the spot. There is a wide selection of body types, and all have a screen-shaped head that can broadcast the webcam of the user – sort of like the robots from the Saga comic series.

It’s natural for Mytaverse team members to have a soft spot for the robot avatars, and it’s natural for them to want to team up with their partners at Unreal. However, there’s a sense that Ready Player Me lends a sense of identity because of how universal the avatars are becoming. For example, I used the same avatar in this interview as I used in a recent tour of Spatial.

No matter which avatar system you use, emotes are provided ranging from the practical, like waving a hand, to a softkey for dancing a jig. The avatar is controlled by standard WASD controls on a computer or by touch on a mobile device. Need to get somewhere fast? Hop on a hoverboard, teleport short distances, or pull up to “beam” in between locations on campus.

The entire experience is browser-based and hardware-agnostic made possible by cloud computing (AWS is also a partner). So far, “hardware-agnostic” doesn’t include headset support – though that’s on the schedule for the second half of next year. What’s the holdup? A lot of headsets don’t yet have the display quality to keep up with Mytaverse graphics.

“We don’t want to dumb down our graphics for a headset,” said Mc Illece.

Writing reviews of platforms like Mytaverse is almost a little sad. I was really impressed by my tour of the platform. And, I hope to be invited back for some remote event or another. However, this is an enterprise platform so a lot of readers might never get a look. But, that’s fair, as the platform brings a slew of top-shelf tools that enterprise users need more than casual users.

NVIDIA and Autodesk Bring Collaborative XR Experiences to the Cloud