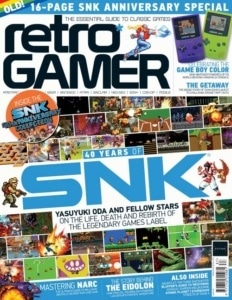 Are you a human being of a certain age, whose geographical location and status as a television viewer allowed you to watch Movies Games And Videos on ITV? If so: congratulations, you are old like us, and you evidently had a lot of free time on Saturday afternoons like us too. We remember it because the show had an odd habit of featuring Neo Geo games, and you didn’t often see that outside of an arcade.

But also, you might remember Steve Priestley, the forever unseen narrator of that particular television programme. Well, thanks to Funtenga Video Software, he’s back doing the thing we all remember – narrating footage of game previews. But these are no ordinary games! Instead, you will see men fighting their trusty vessels and the wonders of Thanks Blaster. It really does defy reasonable explanation, so we’d advise you just click the play button and leave the problem of working it out to future you.

Shards of Infinity is going digital!!!!