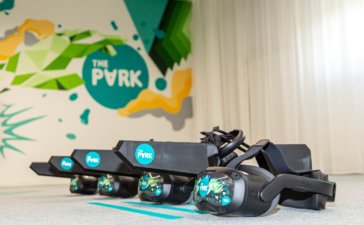 The development of mobile-based VR will usher in a new era for location-based entertainment (LBE). HTC VIVE and The Park Playground have partnered to bring mobile-led VR experiences to the public. So far, 75,000 users have been able to test out the capabilities of the HTC VIVE Focus 3 headset across various The Park Playground venues in Europe.

The Journey to Innovation for Location-Based Entertainment

After a nine-month testing phase that allowed both parties to fine-tune their product proposition, HTC VIVE and The Park Playground are now giving users the opportunity to enjoy a new level of freedom and immersion in VR environments. Unlike traditional VR gear, which makes use of cables and unwieldy equipment, the HTC VIVE Focus 3 is capable of delivering a fully wireless VR experience for players. Without having to wear the hardware as backpacks, users can now have more freedom to move. The VR content is streamed directly into the mobile device, further allowing users to enjoy fully immersive and unrestricted VR experiences.

“The Park Playground has been an interesting partner for us since we first collaborated in 2018, because it attracts people of all ages with its exclusive VR adventures, not just gamers and tech enthusiasts,” said Fabian Nappenbach, Director of Product Marketing at HTC VIVE EMEA, in a press release shared with ARPost. “The partnership has also had a positive impact on our VR product development. Our research and development teams have a close relationship . . .  Their input helps tremendously to drive the technology and also our LBE software.”

Aside from providing a hassle-free gaming experience, the HTC VIVE Focus 3 headset delivers stunning 5K visuals and an expansive 120-degree field of view. Furthermore, it boasts a 90Hz refresh rate. The headset is also designed to offer convenience to users. It has an ergonomic design, removable batteries, and an easy-to-clean magnetic face gasket. Through the HTC VIVE VR headset and The Park Playground, users can unlock unique yet accessible VR experiences that break down the boundaries of the digital and physical worlds. Furthermore, this lets players of all ages enjoy an array of co-op and competitive games in the same space.

The location-based entertainment market is projected to have a compound annual growth rate of 34.4% from 2021 to 2028. This significant expansion is due in part to the growing demand for immersive content. Furthermore, XR technologies are viewed as key players in taking location-based experiences to the next level.

Location-based entertainment has the potential to change how users approach not only social but also emotional experiences. However, customer needs and expectations in this industry are ever-evolving. With the HTC VIVE Focus 3 headset and the company’s partnership with The Park Playground, more users can now access this technology. For instance, up to eight players per play area can access this new VR experience. Plus, the technology is being distributed to over 10 of The Park Playground’s locations.

Furthermore, it allows users to make their own choices while playing the game, giving them the opportunity to build one-of-a-kind and memorable experiences.