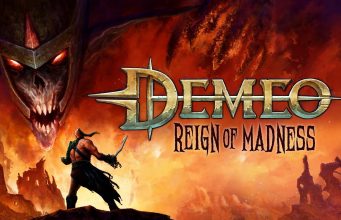 Popular VR-optional dungeon board game Demeo has released its fifth & final chapter as a free update. Called ‘Reign of Madness’, the new chapter brings new levels, enemies, a playable character, & more. With several meaty free updates under the game’s belt since release, the studio plans to increase the game’s price from $30 to $40 next month.

If you’ve been waiting for more adventures in Demeo, today is your lucky day. The ‘Reign of Madness’ chapter is available now as a free update to all versions of the game.

Along with new levels, enemies, and ability cards, ‘Reign of Madness’ adds Uhrak the Barbarian as a new playable character which, according to developer Resolution Games, “relies on his trusty Hook of Varga to keep friends close and enemies closer.”

This chapter also brings a bonus: unique musical tracks performed by the Czech National Symphony Orchestra, including an orchestrated arrangement of the game’s title song.

‘Demeo Reign of Madness’ Screenshots
1 of 5

Following a handful of meaty updates since launch Demeo now includes five unique chapters, six playable characters, a social handout mode, and is soon to get PVP as well. As such, Resolution says it plans to increase the price of the game from $30 to $40 starting on January 12th, “to better reflect the breadth of the game.” Fair play.

Resolution is calling ‘Reign of Madness’ the “final chapter in the Mad Elven King Saga,” but seems to be leaving the door open to the possibility of more DLC in the future (paid, we’d guess).