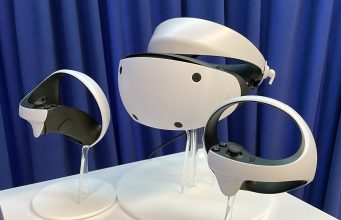 Sony has revealed the price and launch date for PSVR 2, although it still hasn’t tossed out a launch day lineup for PSVR 2. We’re adding more games to out running list though the closer we move to the February 22nd launch of PSVR 2.

Here’s a look at what we hope will be a quickly growing list of all games announced for PSVR 2 thus far. Also, don’t forget to check out our detailed hands-on with PSVR 2 hardware to see what sets it apart from the original.

There is no list of launch-day games yet. In our list, we take a look at the games officially mentioned by Sony, followed by the rapidly growing number of studios committing to support PSVR 2 at some point.

Horizon Call of the Mountain

Horizon Call of the Mountain isn’t a log flume ride or hollow VR “experience” like the trailer might suggest. Nay, developed by Sony’s first-party Guerrilla Games and Firesprite Studios, the first VR take on the Horizon universe is going to be an honest to goodness story campaign the devs say will take around seven hours to complete, along with some “additional content” included in the game.

Check out our hands-on here.

Star Wars: Tales from the Galaxy’s Edge is an action-adventure experience where you’ll take on the role of a droid repair technician operating near the Outer Rim. First introduced on Meta Quest in 2020, this will be the first time this run-and-gun, Star Wars-flavored adventure will be available outside of the Meta ecosystem.

Check out our spoiler-free review here

Resident Evil 4 is already available on Quest 2, although this particular version is a classic zombie shooter of another stripe. The game coming to PSVR 2 is actually the remake, so we’re getting all new everything this time around and not just uprezzed textures. We’re hoping the VR support is as good as the Quest 2 version, and decidedly better than RE7 Biohazard, which wasn’t bad, but it is showing its age since it was released in 2017.

Created by VR veteran Resolution Games, Demeo is a VR take on a tabletop RPG dungeon crawler. It has fared remarkably well on Quest 2 and PC VR headsets since release in 2021, which is in part thanks to its basement-themed, D&D-style action that lets you unite with friends for a tactical gaming night from afar.

Check out our review here

The redemption story continues, as Hello Games vows to bring its space exploration simulator to PSVR 2, including all of the successive patches and DLC drops that took it from procedurally generated empty shell to a universe truly brimming with possibilities.

This is a full-fat sequel to VR’s most popular games as of late, The Walking Dead: Saints and Sinners. Like the first in the series, you’ll scrounge around a post-apocalyptic New Orleans that’s not only brimming with the undead, but also rival gangs that you can choose to join or battle. Physics-based combat, low ammo supplies, and a very touchy stamina system means you’ll need to think long and hard before running into that crowd of walkers.

It’s not clear how much “new” content we’re getting right out of the bat with First Contact’s next Firewall game, which like the original promises tactical squad-based shooting action across a host of maps, although Firewall Ultra is decidedly the future of the franchise. We can expect to see legacy maps, characters and weapons, but also updates for more of everything down the line.

Supermassive Games just revealed The Dark Pictures: Switchback VR, or what it calls a “fast-paced roller coaster action-horror-shooter where every move you make, and everything you see, could mean the difference between life and death.” Set inside the sinister world of The Dark Pictures Anthology, Switchback VR makes good use of headset eye-tracking: some enemies only move when you blink (Visine not included).

Smilegate tossed out a trailer to a brand-new VR game called Crossfire: Sierra Squad, a first-person shooter in the Crossfire universe. The game is played either solo or in co-op mode with up to 4 players on a team as you battle against AI baddies. The studio says there are 39 types of weapons including pistols, rifles, throwable – and throw back-able – grenades and sniper rifles with revolutionary scope mechanics give you plenty of options to dispatch 17 types of enemies.

Funktronic Labs showed off a new single-player roguelike game called The Light Brigade which it says is “filled with immersive gunplay and moody mystery.” Uncover the mystery of the gloomy ‘Sunken World’ as you climb the ranks of the titular Light Brigade, unlock firearms and unique spells. The Light Brigade will be available for pre-order starting November 15th.

tinyBuild Games and Steel Wool Studios (Five Nights at Freddy’s) announced a VR take on viral indie hit Hello Neighbor, which is coming to both PSVR and PSVR 2 with cross-buy. “Mr. Peterson’s creepy house takes on a new level of immersion in VR, and there is nothing quite as scary as actually seeing that familiar shadow tower over you just before everything goes black,” tinyBuild says. Hello Neighbor: Search and Rescue will be available for pre-order starting November 15th.

Cloudhead Games is bringing a free PSVR 2 upgrade to the PSVR version of its award-winning physical action-rhythm game where thrilling gunplay and dynamic tracks collide, creating a dreamscape world for players to blast, duck, and dodge their way through to become the ultimate action hero.

With its intial launch on Quest earlier this year, Fast Travel Games managed to bring Cities: Skylines to VR, albeit in a slightly smaller package to run on VR hardware. Smaller, as in the size of your city: you’re actually a Godzilla-sized goliath towering over your little town as you manage all of its buildings and keep up with city planning.

Owlchemy Labs is known for highly interactive, super approachable VR games, such as award-winning titles Job Simulator and its sequel Vacation Simulator. This one went live a few months ago on Quest and PC VR headsets, and we can’t wait to see PSVR 2’s eye-tracking bring our avatars to life.

From Ramen VR comes the PSVR 2 version of its Kickstarter success story, the MMORPG know as Zenith: The Last City. Promised to be a day-one launch title, there are hundreds of hours of content to chew through in this well-realized VR native.

Initially launched on Quest and PC VR, Firepunchd Games is bringing its wild adventure where you, a gigantic but good-hearted tentacled beast, is trying to figure out your place in the world. Help your human friends to research a strange and incredibly powerful energy source. Make progress by solving a colossal mix of action-based activities and physical constructions puzzles which unlock elements for your very own playground.

Launched on PC VR, Quest and the original PSVR, Vertigo Games is bringing an enhanced version of the co-op zombie shooter to PSVR 2. If you haven’t heard of it before, it’s essentially Left4Dead, but in VR, letting you sweep through levels with friends and strangers as you mow down massive hordes of zombioid baddies. Upgrade your stuff, come back for more.

Coatsink originally brought this two-part psychological dino-thriller to Quest, making for a heart-pounding game of cat-and-mouse with a gaggle of Raptor baddies. Use your eyes and ears to alert you to impending doom, and hide from certain death if you can, Make sure to check out our spoiler-free review of both part 1 and 2 on Quest to see what’s in store.

Initially released on Steam and PSVR, Altair Breker is a map-based sword fighting game from the makers of Swords of Gargantua, Thirdverse. You can team up with three other friends or go it alone as you for an adventure that the studio says its for “players who want to experience stylish sword-fighting action and feel like the hero in an anime world.”

Thirdverse is also developing a multiplayer shooter called X8, which is set to launch on PSVR 2 in addition to PC VR and Quest 2. Developed by Thirdverse’s US-based studio, the 5v5 hero shooter is slated to arrive on those other platforms sometime this winter before rolling out to PSVR 2 at some point.

Other Games Announced for PSVR 2

Update (November 28th, 2022): Eurogamer’s Ian Highton has mentioned a few more titles coming in a video breakdown that has filled in some gaps in our list. We’ve added X8 and Altair Breaker to the official Sony-sanctioned list, and a handful of others in the studio-announced titles listed above.

Did we miss any? Let us know in the comments below so we can include it in our list!