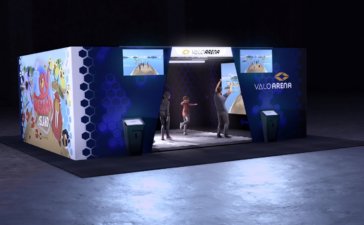 When people turned to the virtual world to connect with each other at the height of the pandemic, MMOs and other multiplayer games got a boost in popularity. Multiplayer XR games also began growing as a new genre of immersive cooperative play. While these games have the same basic goal of allowing multiple players to share experiences in the same virtual environment, they continue to evolve and develop into games that go beyond entertainment.

Most multiplayer AR/VR games today bring different players from different geographical locations into a shared virtual environment where they engage in cooperative play. The players use wearables and controllers to make the experience immersive. This type of game enabled people to have some form of social interaction during pandemic lockdowns.

As restrictions eased, other types of multiplayer AR/VR games that could be enjoyed together in the same physical space also became increasingly popular. One example is Keep Talking and Nobody Explodes, a co-op party game where one player gets trapped, virtually of course, in a room with a ticking bomb. Other players in the same physical room give verbal cues to help diffuse the bomb. There’s also Reiko’s Fragments where one player has to escape a haunted house and other players in the room play as spirits who control the haunted house. Players engage in these games together in the same room.

Taking Multiplayer XR Games Beyond the Boundaries of Physical Space

ValoArena takes multiplayer XR games further to another level. This mixed reality playground that can accommodate up to six players requires no wearables and no controllers. Players are not tethered by wires and can interact freely with each other in the same physical space that gets transformed into a hyper-realistic virtual environment.

In ValoArena, players can choose from a variety of games that encourage physical activity and social interaction. Players jump, run, dodge, and help each other through challenging obstacles in the arena-like stage. Since there are no wearables and wires, players can hold hands, carry each other, give high fives, and laugh together. Spectators can watch live and cheer for them too.

See Also:   How Active Games Can Make You Healthy

“For me, the best thing about ValoArena is to observe groups and how they have fun together,” said Steffen Brunckhorst, CEO of the German family entertainment center Abenteuerland, in a press release shared with ARPost. “They compete with each other or cooperate, and they are laughing. People are completely immersed in the game, and they are visibly having fun playing.” Aside from providing players with a more socially interactive way to play XR games, ValoArena also offers operators ease of operation. The system has high throughput, requires no employee supervision, and is easy to play. With the rising popularity of ValoArena, some operators are reporting utilization rates as high as 86%, according to Valo Motion

Valo Motion Brings ValoArena to the US

After its successful launch in Europe, ValoArena is now ready to make waves in the United States. Its Finland-based maker, Valo Motion, has announced the first two installations of the immersive arena at the RPM Raceway in New York and at Air Madness in South Dakota. According to Dr. Raine Kajastila, CEO of Valo Motion, the US launch of ValoArena brings a fresh alternative to passive play in out-of-home amusement locations.

“ValoArena is much more than just a revolutionary concept; it’s an evolutionary step forward,” Kajastila said.  “We have taken the best from our ValoClimb and ValoJump attractions and built a truly social group gaming experience where active fun and laughs can be shared by groups and families.”

Additional units of ValoArena will be available for installation soon and will be an exciting addition to over one thousand Valo Motion products (ValoClimb and ValoJump) currently located in family entertainment centers in over 30 American states.

How to Get Three Months of Spotify Premium for Free

9 Awesome iPhone Apps to Help With Your Holiday Shopping