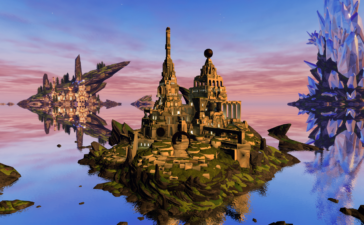 After the exponential growth in the global VR market during the pandemic, the demand for more immersive gaming experiences continues to increase at a steady rate. In fact, the VR gaming market is expected to reach $33.65 billion by 2026.

One clear indication of this growth is the wide variety of virtual reality games available today. We can easily play RPGs, VR puzzle games, platformers, and other game genres on various devices such as VR headsets, gaming consoles, mobile devices, and PCs.

See Also:   How VR Is Reshaping the Online Gaming Industry

One of the latest additions to the growing list of immersive VR games is Shores of Loci, a single-player narrative puzzle game developed by a women-led production studio, MikeTeeVee. By combining mentally stimulating challenges and soothing sound effects, the game provides users with a unique VR puzzle game experience that eases stress and calms the mind.

Shores of Loci: A Puzzling Adventure

Shores of Loci transports players into a surreal world where they become part of a multidimensional story set in mystical realms. Each chapter takes players into a different dimension where they embark on an adventure, helping giants and villagers reclaim their land and rebuild their homes.

They must reconstruct the virtual domains by finding the right pieces of land and putting them together. Once all the correct puzzle pieces are in place, they merge together into spectacular scenery delivered in crisp 4K resolution.

The gameplay is highly intuitive, creating an inclusive experience as players travel through the different realms. As they complete the puzzles, unique characters start populating the cities and villages they have rebuilt. Aside from having a sense of accomplishment for successfully solving challenging puzzles, players also feel a sense of fulfillment for rebuilding and restoring forgotten civilizations and quaint towns, albeit virtually.

Shores of Loci is also one of the few VR games that are completely for all ages and all genders. The game can be played while standing or sitting, so it’s also inclusive. There are currently five chapters with twelve different puzzles and a sixth chapter set underwater that’s being developed.

The VR puzzle game is available in Meta Quest Store for $14.99.

An Immersive VR Puzzle Game Set in a Meditative Environment

What sets Shores of Loci apart from other VR puzzle games is the way it integrates a meditative ambience into its gameplay. With the game developed in the midst of the pandemic, its designers were intent on creating a VR game that nurtured the mental health and well-being of players.

Unlike other games that boost adrenaline by putting players in combat environments or competitive scenarios, Shores of Loci encourages peaceful exploration where there are no enemies, no battles, and no time limits. There are no penalties for choosing the wrong puzzle pieces, so players can go leisurely through each puzzle without stressing over scores or rankings. To make the game more relaxing, there are serene sound effects and calming music. As the demand for more meaningful experiences in virtual reality grows, we can expect to see more games like Shores of Loci that aim to positively impact its players. VR games that are both immersive and meditative will provide unique experiences that can uplift our well-being. They will transport us to virtual worlds where we can clear our minds and relieve our stress.