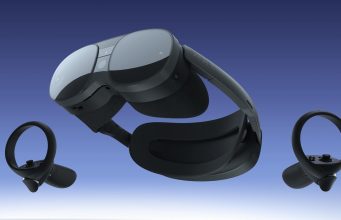 HTC officially unveiled its next consumer-focused headset at CES 2023 today. Called Vive XR Elite, the standalone mixed reality device boasts a feature set that positions HTC to go toe-to-toe with Meta’s Quest Pro, but at a notably cheaper price of $1,100.

The moniker ‘Flowcus’, a portmanteau coined by VR analyst and YouTuber Brad Lynch when the headset’s design was initially leaked in November, seems to ring true with Vive XR Elite. The design seems very much like a mashup of Vive Flow, a casual VR content viewer using pancake lenses, and Vive Focus 3, the company’s enterprise-focused standalone.

Vive XR Elite is starting pre-orders today, with shipping slated for sometime in late February. There’s no exact launch date on the books, so in the meantime let’s talk about some of the features HTC announced today, some key specs still in need of clarification, and the headset’s slew of gaming-focused content.

But first, the trailer:

Unlike HTC products in recent memory, Vive XR Elite is specifically targeting gaming, fitness, productivity and on-the-go content consumption, the latter of which is thanks to a convertible battery headstrap that can be unplugged in favor of a glasses-like temple pieces.

It’s an interesting feature that’s a first for any major VR headset, which would hypothetically allow you to lean back in a seat without having a bulky back-mounted battery to contend with.

Of course, you’ll need some other power source to run the Vive XR Elite if you opt to remove the battery, be it a separate powerbank or a USB cable connected to the mains.

What’s more, Vive XR Elite is a mixed reality device, meaning it can switch between standard VR games and those that use color passthrough AR, putting it in the same category as its chief competitor Meta Quest Pro. And like Quest Pro, Vive XR Elite can be connected to a PC via USB-C for PC VR content, as well as wirelessly over WiFi, with support up to WiFi 6E. We’ll talk a little more about content in a bit.

Below, you’ll see the headset has four room-tracking camera sensors, one on each side and one hidden respectively under each faceplate. In the center is a single RGB camera for color passthrough as well as a depth sensor, which in theory would increase accuracy of room-scale tracking and object recognition.

Vive XR Elite also boasts Android app streaming, letting you interact with Android apps and games on a virtual cinema screen of “300 inches,” the company says. Users can also link Bluetooth gamepads to their phones for a fuller mobile gaming experience. That’s probably the only way you’d catch us playing Fortnite on a VR headset like this, since manipulating controls on the phone’s touch surface probably wouldn’t be effective.

Here’s a top-down look at the headset, which gives you a good view of how the back-mounted battery attaches, a look at the tightening twist knob, a clear look at the battery’s USB-C charging port. It’s also impressively slim, owing to the inclusion of pancake lenses.

In addition to supporting the same controllers that come with Vive Focus 3, the headset also supports Vive Wrist Tracker, a hand-tracking device that can be attached to the user’s wrist, or to objects like gun controllers, Ping-Pong paddles, or tools.

Here’s a view that shows headset’s diopter settings for its pancake lenses, which ostensibly allows near-sighted users to go without glasses, going up to -6D independently for both eyes. That little slider below the right lens is a mechanical IPD adjuster going from 54-73mm; nope, no eye-tracking here, at least not without the optional eye-tracking module that’s arriving at some point this year.

Audio is served up via two open-ear speakers integrated into the arms of the headset. We’ve poured over all product images and have yet to see space for a 3.5mm audio jack for external audio. That hole near the bridge of the headset appears to be an attach point for the forthcoming facial-tracking module, which is also slate to arrive sometime this year. We’re currently at CES, so we’re adding that to our list of features in need of clarification.

With a consumer target clearly in its sights, HTC is offering up a slew of gaming-focused content for Vive XR Elite (full list below) that includes what the company says is “100 new pieces of MR and VR content” including Demeo, Hubris, Yuki, Maestro, Les Mills Body Combat, FigminXR, Unplugged, Finger Gun, and more.

Post-launch content will include Everslaught: Invasion, and later in the year full MR games like Eggscape. As you know, a consumer VR headset is nothing without games, so it’s good to see HTC do its due diligence to attract some of the top games to the headset. No Beat Saber, but we wouldn’t expect Meta to prioritize porting the popular block-slashing rhythm game to such a direct competitor.

The company says Vive XR Elite will also be available for enterprise users at some point, with more information coming later this year.

Vive XR Elite also has connectors for both face and eye-tracking modules, which are set to launch separately sometime in 2023. We’ll be going hands-on at CES 2023, so make sure to check back for our full impressions of HTC’s next big leap into consumer VR. We won’t be able to say just how good a proposition Vive XR Elite truly is until we get our hands on it, and see if it really stacks up to the competition. As it is, it lacks eye-tracking for out of the box social presence and foveated rendering, and we still don’t know how it goes mano a mano with Quest Pro in the passthrough department with its single RGB passthrough camera.

One of the biggest selling points is HTC Vive XR Elite’s price, which although clearly not near the sub-$500 console price that typically gets us excited, it’s coming in a fair bit cheaper than the $1,500 Meta Quest Pro.

Note: many regions include taxes calculated in the final price above (UK, EU, AUS, etc) but a notable exception is the US. Sales tax varies widely through the US based on each state, so the final price in USD could range from exactly $1,099 in a minority of states with little to no sales tax to around $1,240 in states on the higher end of the range. Here’s the regional price breakdown:

HTC provided a full content lineup, although the company hasn’t made it entirely clear which games are considered launch-day titles and which will come post-launch. HTC is calling the list below “launch window content,” so we’re checking with them now and will update once we know.

In any case, you’ll see a lot of overlap between the latest games on Quest 2 here. Highlights include Demeo, Green Hell VR, Les Mills Bodycombat, Unplugged, Hubris, Ancient Dungeon, The Last Clockwinder, and Ultrawings 2 to name a few.

We have boots on the ground at CES 2023, so check back soon for our impressions of Vive XR Elite and all things AR/VR for this year’s biggest consumer electronics show.

Every Game Getting a Free PSVR 2 Upgrade