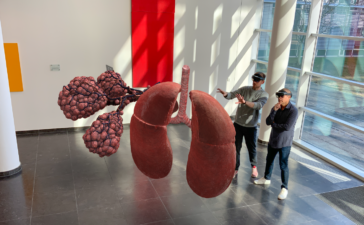 GigXR creates and hosts some of the most mind-blowing educational experiences in what spokespeople call “the mediverse.” Through partnerships with some of the world’s best educational institutions and the world’s most innovative technology companies, the company is helping to bring medical education into the 21st century.

GigXR was founded three years ago specifically to take on XR projects from textbook publisher Pearson. By partnering with other creators to host a variety of content, the platform is still like a publishing house of sorts, but a bit more interesting. No offense, Pearson.

The last time ARPost caught up with GigXR was back in May when the company announced a partnership with ANIMA RES, a 3D medical animation company. The partnership added the Insight Series by ANIMA RES content to their library, which already hosted content from Pearson, Microsoft, and medical universities like Cambridge and the University of Michigan.

Insight works kind of like a product configurator, but instead of changing the color of a virtual car, you’re increasing the stroke volume of a holographic heart, or decreasing the respiratory rate of a holographic lung. Don’t worry, there’s a fresh update from the ANIMA RES series too, we’ll get to that. But first, let’s step back to a developing story from this summer. “Empowering instructors with 360-degree preparation for clinical practice represents a milestone for GigXR that allows us to provide our customers with a library of applications that offers solutions for students from their first courses to continuing education,” company founder, David King Lassman, said in a release shared with ARPost.

The trainees must then not only diagnose the condition, but interact with holographic medical tools to stabilize their virtual patient.

“With HoloScenarios, we’re helping to evolve education from a mentorship-based model to one where students around the world can have equal access to top-flight expertise for mastering invention-based clinical skills,” Cambridge University Health Partnership Director of Postgraduate Education, Arun Gupta, said in the release.

Further, as this article was being written, HoloScenarios was named one of the 200 best inventions of 2022 by TIME.

In November, GigXR announced a massive availability expansion for the Insight Series, accessible through mixed reality headsets or Android or iOS mobile phones or tablets. The modules are now available to “medical schools, nursing schools, healthcare providers, and government and defense agencies worldwide,” according to a release shared with ARPost. “Partnering with GigXR gives us the springboard to expand our geographic reach to match GigXR’s global footprint and get our market-leading content into the hands of educators and learners worldwide,” ANIMA RES CEO, Pablo Olmos, said in the release. “Together, we aim to give learners the best tools for success throughout training and clinical practice.”

Anatomy and Physiology Inside and Out

These announcements are both exciting, but become even more interesting discussed together. The ANIMA RES Insight Series help to get up-close and personal with the interior bodily conditions that can cause the external symptoms that trainees encounter and solve in the HoloScenarios. GigXR offers these and other modules in a tidy package.

How Active Games Can Make You Healthy