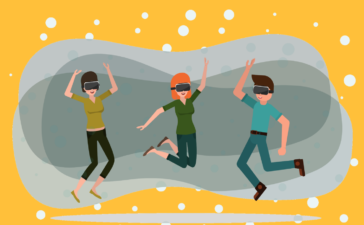 A look around the media landscape will make it clear that virtual reality has become a major player in the music industry and virtual concerts are on the rise with performances by mainstream artists in popular games and other platforms.

Yet, with all the hope promised by the “metaverse,” not only do these events fail to optimally leverage the innovation of VR, but they also fall short in using music to help create immersive social spaces for people to gather virtually where they feel connected to each other and their humanity.

In the wake of the COVID-19 pandemic and social distancing, many artists are including virtual and hybrid events as part of their tour schedules.

Last year, United Talent Agency (UTA) polls indicated that three out of four people attended online events during the pandemic and, of those, 88% planned to continue even when in-person events came back.

Given the investment in this virtual space by companies including Meta, HTC, ByteDance’s Pico, and soon… Apple with their anticipated headset likely to be announced in 2023, the AR/VR market is a major player in the music industry, even spawning the “Best Metaverse Performance” category in the 2022 MTV VMAs.

Some of these events are being called nothing more than a “kiddie cash grab,” leaving audiences wanting more out of the virtual experience that will truly make use of VR as a medium and a new form of expression.

Possibility for a New Mode of Discovery

There are, however, burgeoning examples of innovative and thoughtful approaches to VR/AR music experiences. The 2018 Sigur Rós and Magic Leap collaboration, Tónandi, demonstrated what can be possible with an immersive and interactive AR music experience, though not currently available on all platforms. This ambitious project featured the Icelandic pop-rock band in a music experience for a high-end AR device that brought music, visuals, and interaction together equally to create a synesthetic experience.

One of the promises of the metaverse is to bring people together virtually. Traditionally, live music events have been a place where people could gather for a communal experience. This is the missing piece to current VR music events, which have yet to find an organic way for audience members to interact both with the artist and with each other.

Then, there is the possibility of bringing composed scores into virtual spaces, to connect with people’s psyches and emotions as music has done in concert halls, films, and television shows for a long time.

While not a music-centered app, Mighty Coconut’s Walkabout Mini Golf – a virtual reality game for which I compose the original scores – gives an example of how VR/AR can become a gathering space for people to experience visuals and music while exploring the virtual world or just hanging out together.

Each course presents a captivating world with a distinct mood, created by the music, visuals, and course design that present an alternative to typical VR/AR games and music experiences. Players consider it a place as much as a game, and their connection to the soundtrack has led them to stream it on various services just to bring them back to that sense of place.

Virtual reality music experiences are here to stay. While VR/AR is currently most strongly associated with games and major companies, there is much to hope for with content put out by independent studios and artists, who are able to be more flexible in adapting to changes in technology and audience demographics. This virtual space will offer new and exciting possibilities for musicians and audiences.

Anyone invested in music going forward—artists, academia, fans, bookers, labels, music supervisors, and even advertisers—would be well advised to keep an eye on VR/AR and to start learning what’s happening in this space.

Like music albums and films, these tools are just another mode of expression for artists to connect to audiences and, hopefully, encourage people to connect with each other.

Applications of Virtual Reality for Nonprofits