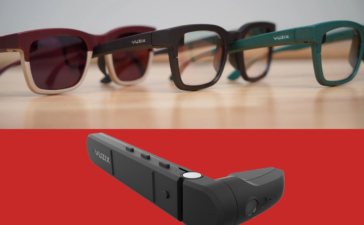 At the beginning of this year, Vuzix announced two new smart glasses, the monocular enterprise model M400C, and Shield. After months in manufacturing, the M400C is ready to ship. There are also some new technical details that we have access to – including the all-important price.

Vuzix also recently announced that they will be showcasing the platform for an upcoming potential consumer model.

Vuzix announced the M400C in January. At under a fifth of a pound, the model is a lighter-weight version of the M400, with the M400 being wireless and the M400C connecting to an external computer. Being connected to an external device makes product management easier and means that the device has no onboard battery.

It’s not just lighter, it’s also potentially more durable. The M400C has been drop-tested to six feet, while its heavier-hitting and higher-priced older brother has only been drop-tested to three feet. While this might not matter much to casual XR users, it’s a big deal for the use cases and clients that Vuzix works with. (Casual XR users, don’t go anywhere just yet). The monocular design clips to a glasses frame, or to the same accessories as the original M400, including hard hats and headbands. The device has control buttons and a touchpad onboard, but can also be controlled via voice commands, or software on the connected computer.

The glass offers a discrete but accessible display, while the exterior of the frame houses an auto-focus HD camera capable of target scanning, photography, and streaming video. The frame also houses a speaker and microphone for recording, listening to audio, or two-way communication between the wearer and a remote party.

“The M400C represents the ideal replacement for external or hand-held monitors, cameras or other recording devices, or 2-way audio devices. We are thrilled to add this product to our existing family of smart glasses solutions,” Vuzix CEO and President, Paul Travers, said in a press release.

This Model in the Vuzix Ecosystem

When we spoke with Travers in January, we didn’t yet know the price of the M400C. We now know that the smart glasses ship to customers in the US, Canada, UK, EU, and Japan for $1,300 – almost half the price of the original M400. That leaves more budget for attachments and accessories.

While Vuzix has discussed making their even lighter form factor AR glasses publicly available, the M400C still needs to be purchased through the company – you won’t find them on the shelves of any department stores.

As this article was being written, the company further announced that it will showcase the platform for its upcoming Ultralite glasses at CES this year. I’ve gotten mad at Vuzix in the past for sneaking announcements past me by showcasing them at the Consumer Electronics Show, but this time it’s fitting.

“Ultralite” is the name of a project that Vuzix has been showing tantalizing prototypes of for years. They’re the kind of AR glasses that we’ve always wanted. Well, they’re a monocular display. But, they look and feel like a standard pair of glasses. “Vuzix is leading the charge to make the dream of sleek and fashionable smart glasses come true for the broader market, and it’s happening as we speak,” Travers said in a release.

Remember the fraction of a pound that the M400C wears? Ultralite weighs about half of that, and they’re wireless. They’re being called a “smartphone accessory” so, at least at first, they’ll probably offer things like heads-up screen mirroring and maybe a few basic spatial apps, but that’s still super cool.

Anyway, we still don’t have a roadmap (or a price tag) for the Ultralite. And, it looks like the glasses will be offered as an OEM. That means that you probably won’t buy it from them directly, but from another tech company – probably your mobile phone provider, similar to how Nreal rolled out Light. But it’s still thrilling.

The M400C shipping is exciting for enterprise. Movement on the Ultralite is exciting for consumers. There aren’t a lot of companies playing both sides like that. Honestly, it’s super exciting that it’s Vuzix. If anyone is going to give us full-color, full-size display AR glasses in a comfortable and stylish form factor that can also stop a bullet, it’ll probably be them.