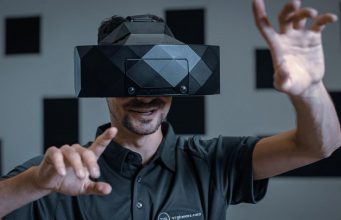 Vrgineers, the team behind enterprise-focused wide-FOV VR headsets, announced at CES 2023 this week that it’s releasing a wireless version of its latest XTAL VR headset.

To realize the newest flavor of XTAL coming to enterprise, the company worked with IMRNext to create a belt-style Wi-Fi transmission module that includes what Vrgineers call “a powerful battery pack.”

Vrgineers XTAL natively runs 4K resolution per eye, making it a tough feat to transmit via Wi-Fi. To get around this, the companies developed a special mode running a compressed resolution of 2,560 × 1,440 at 70 Hz per eye, which is then transmitted via Wi-Fi 6E to a dedicated receiver plugged into the workstation.

A belt-worn solution is probably for the best, since the XTAL headset is already fairly bulky in size, although not terribly heavy at only 600g (~1.3lbs) without the headstrap. A prototype of the belt-worn transmitter is available at CES 2023, which is said to weigh 920 grams. The final version is slated to weight in nearly half that, which would nearly double the weight of the headset if the company opted to mount it to, say, the back of XTAL’s headstrap.

The receiver module, a proprietary Wi-Fi access point from IMRNext, connects to a single USB and Display Port from the GPU, and then converts the signal into Wi-Fi 6E and streams it directly to the on-belt module.

We’re here in Las Vegas, and will be visiting the Vrgineers/Somnium booth to gather our impressions.

Here’s a look at the latest ‘XTAL 3 Virtual Reality’ specs, which will remain the same with the new module, which is said to ship to pre-order customers in Q3 2023. There’s no public pricing available, so enterprise customers will need to reach out to [email protected] to order.