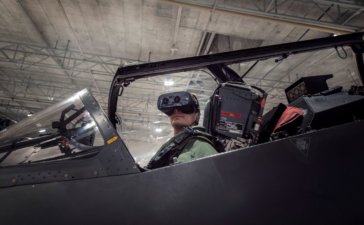 Passthrough is turning VR companies into AR companies. But, it isn’t perfect. Often, the AR view of the world offered via passthrough has less visual fidelity than the VR view. This poses a problem when an AR experience relies on fine details in the physical environment like in simulation and training. Varjo has a solution.

That solution is a modified version of the company’s already awe-inspiring mixed reality headset XR-3. By the way, if your company has any security concerns at all, this headset solves those too.

The XR-3 and the Passthrough Problem

Varjo offers some of the highest-quality VR headsets in the world for remote collaboration and immersion in virtual worlds. However, customers may need a fine blend of both virtual elements and real-world environment. For these users, Varjo released the XR-3 last spring.

The XR-3 mixed reality headset introduced us to “variable passthrough” allowing users to move back and forth from virtual reality to augmented reality and back again. It’s an amazing piece of kit but there’s a catch.

If you’ve ever used passthrough on a device like the Meta Quest 2, you know that the passthrough isn’t crystal clear. Even reviews of the newer Quest Pro, which is based almost entirely around its passthrough feature, say that users can’t do things like read while in passthrough mode.

See Also:   Should You Buy a Quest 2? Hands-On Review

The new XR-3 Focal Edition offers its XR passthrough through two high-resolution 12-megapixel cameras – just like the original XR-3. However, the cameras on the XR-3 Focal Edition are specifically calibrated “to provide an improved image clarity” between about one and three feet away from the user. “The optimized components in the mixed reality camera system change the distance of the focus so the lens brings a sharper depth of field, closer to the user,” a release shared with ARPost explains.

That makes a big difference for people using the headset to learn how to navigate highly complex environments reliant on extremely fine detail, for example, cockpits or car dashboards. Users can also interact with physical handheld devices like mobile phones or controllers.

“We heard from our customers the need for more precise visuals at a closer distance, specifically when looking at dashboards, cockpits, and cellphones,” Varjo Chief Commercial Officer, Seppo Aaltonen, said in the release. “We responded with the XR-3 Focal Edition to address this need.”

Depending on the use case, focal planes might not be the only barrier to using XR – or, not using it as one might like. For many potential users, security concerns are also a problem because XR headsets have to access cameras and audio. Users also have to create accounts and access the internet on headsets – except for the XR-3 Focal Edition. The Varjo XR-3 Focal Edition is TAA/BAA compliant, ships with a “perpetual offline license” that does not require an account, and can ship with the radio frequency capability removed. So, while the headset still uses a camera and audio, that info can be kept entirely on the device and any connected computer.

“The XR-3 Focal Edition can support the most demanding security needed for the United States Department of Defense, intelligence, and security-critical infrastructure customers,” reads the release.

The original Varjo XR-3 deserves to go down in spatial computing history. Despite the amazing features of the original headset, some special-case users couldn’t get the most out of it because of intensive optical needs or intensive security requirements. The Focal Edition optimizes the headset for even these most challenging customers.

What Is a TSV File (And How Do You Open It)?

The 9 Best Digital Gift Ideas for the Holidays