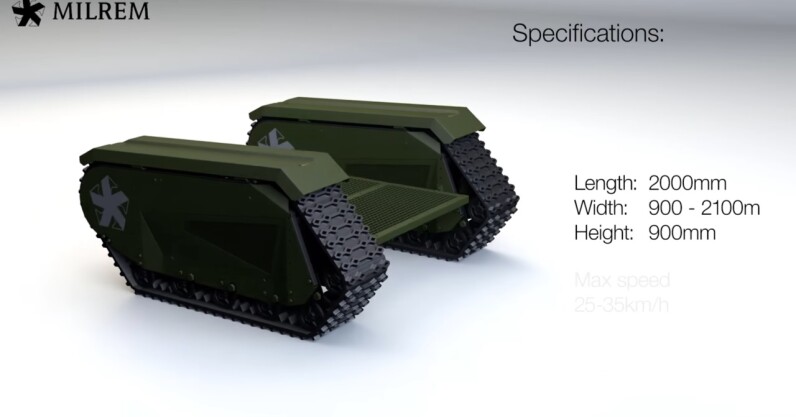 The war in Ukraine has become the largest testing ground for artificial intelligence-powered autonomous and uncrewed vehicles in history. While the use of military robots is nothing new — World War II saw the birth of remote-controlled war machines and the US has deployed fully-autonomous assault drones as recently as 2020 — what we’re seeing in Ukraine is the proliferation of a new class of combat vehicle.

This article discusses the “killer robot” technology being used by both sides in Russia’s war in Ukraine. Our main takeaway is that the “killer” part of “killer robots” doesn’t apply here. Read on to find out why.

This war represents the first usage of the modern class of uncrewed vehicles and automated weapons platforms in a protracted invasion involving forces with relatively similar tech. While Russia’s military appears, on paper, to be superior to Ukraine’s, the two sides have fielded forces with similar capabilities. Compared to forces Russia faced during its involvement in the Syrian civil war or, for example, those faced by the US during the Iraq and Afghanistan engagements, what’s happening on the ground in Ukraine right now demonstrates a more paralleled engagement theater.

It’s important, however, to mention that this is not a war being fought by machines. It’s unlikely that autonomous or uncrewed weapons and vehicles will have much impact in the war, simply because they’re untested and, currently, unreliable.

Uncrewed vehicles and autonomous vehicles aren’t necessarily the same thing. While almost all autonomous vehicles — those which can operate without human intervention — are uncrewed, many uncrewed vehicles can only be operated remotely by humans. Perhaps most importantly, many of these vehicles have never been tested in combat. This means that they’re more likely to be used in “support” roles than as autonomous combat vehicles, even if that’s what they were designed to do.

But, before we get into the how’s and why’s behind the usage of military robots in modern warfare, we need to explain what kind of vehicles are currently in use. There are no “killer robots” in warfare. That’s a catch-all term used to describe military vehicles both autonomous and uncrewed.

So, the first question we have to answer is: why not just turn the robots into killers and let them fight the war for us? You might be surprised to learn that the answer has very little to do with regulations or rules regarding the use of “killer robots.”

To put it simply: militaries have better things to do with their robots than just sending fire downrange. That doesn’t mean they won’t be tested that way, there’s already evidence that’s happened.

However, we’ve seen all that before. The use of “killer robots” in warfare is old hat now. The US deployed drones in Iraq and Afghanistan and, as we reported here at TNW, it even sent a Predator drone to autonomously assassinate an Iranian general.

What’s different in this war is the proliferation of UAVs and UGVs in combat support roles. We’ve seen drones and autonomous land vehicles in war before, but never at this scale. Both forces are using uncrewed vehicles to perform tasks that, traditionally, either couldn’t be done or require extra humanpower. It does also bear mentioning that they’re using gear that’s relatively untested, which explains why we’re not seeing either country deploying these units enmasse.

Developing wartime technology is a tricky gambit. Despite the best assurances of the manufacturers, there’s simply no way to know what could possibly go wrong until a given tech sees actual field use.

In the Vietnam war, we saw a prime example of this paradigm in the debut of the M-16 rifle. It was supposed to replace the trusty old M-14. But, as the first soldiers to use the new weapon tragically found out, it wasn’t suitable for use in the jungle environment without modifications to its design and special training for the soldiers who’d use it. A lot of soldiers died as a result.

That’s one of the many reasons why a number of nations who’ve so far refused any direct involvement in the war are eager to send cutting-edge robots and weapons to the Ukrainian government in hopes of testing out their tech’s capabilities without risking their own soldiers’ skin.

TNW spoke with Alex Stronell, a Land Platforms Analyst and UGV lead at Janes, the defense intelligence provider. They explained that one of the more interesting things to note about the use of UGVs, in particular, in the war in Ukraine, is the absence of certain designs we might have otherwise expected.

“For example, an awful lot of attention has been paid inside and outside of Russia to the Uran-9 … It certainly looks like a menacing vehicle, and it has been touted as the world’s most advanced combat UGV,” Stronell told us, before adding “however, I have not seen any evidence that the Russians have used the Uran-9 in Ukraine, and this could be because it still requires further development.”

On the other side, Stronell previously wrote that Ukrainian forces will soon wield the world’s largest complement of THeMIS UGVs (see the video below). That’s exceptional when you consider that the nation’s arsenal is mostly lend-leased from other countries.

Milrem, the company that makes the THeMIS UGV, recently announced that the German Ministry of Defence ordered 14 of its vehicles to be sent to the Ukrainian forces for immediate use. According to Stronell, these vehicles will not be armed. They’re equipped for casualty evacuation, and for finding and removing landmines and similar devices.

But it’s also safe to say that the troops on the ground will find other uses for them. As anyone who’s ever deployed to a combat zone can tell you, space is at a premium and there’s no point in bringing more than you can carry.

The THeMIS, however, is outfitted with Milrem’s “Intelligence Function Kit,” which includes the “follow me” ability. This means that it would make for an excellent battle mule to haul ammo and other gear. And there’s certainly nothing stopping anyone from rekitting the THeMIS with combat modules or simply strapping a homemade autonomous weapon system to the top of it.

As much as the world fears the dawning of the age of killer robots in warfare, the current technology just simply isn’t there yet. Stronell waved off the idea that a dozen or so UGVs could, for example, be outfitted as killer guard robots that could be deployed in the defense of strategic points. Instead, he described a hybrid human/machine paradigm referred to as “manned-unmanned teaming, or M-UMT,” where-in, as described above, unmounted infantry address the battlefield with machine support.

In the time since the M-16 was mass-adopted during an ongoing conflict, the world’s militaries have refined the methodology they use to deploy new technologies. Currently, the war in Ukraine is teaching us that autonomous vehicles are useful in support roles.

The simple fact of the matter is that we’re already exceptionally good at killing each other when it comes to war. And it’s still cheaper to train a human to do everything a soldier needs to do than it is to build massive weapons platforms for every bullet we want to send downrange. The actual military need for “killer robots” is likely much lower than the average civilian might expect.

However, AI’s gifts when it comes to finding needles in haystacks, for example, make it the perfect recon unit, but soldiers have to do a lot more than just identify the enemy and pull a trigger.

However, that’s something that will surely change as AI technology matures. Which is why, Stronell told us, other European countries are either currently in the process of adopting autonomous weaponry or already have.

In the Netherlands, for example, the Royal Army has engaged in training ops in Lithuania to test their own complement of THeMIS units in what they’re referring to as a “pseudo-operational” theater. Due to the closeness of the war in Ukraine and its ongoing nature, nearby nations are able to run analogous military training operations based on up-to-the-minute intel of the ongoing conflict. In essence, the rest of Europe’s watching what Ukraine and Russia do with their robots and simulating the war at home.

This represents an intel bonanza for the related technologies and there’s no telling how much this period of warfare will advance things. We could see innumerable breakthroughs in both military and civilian artificial intelligence technology as the lessons learned from this war begin to filter out.

To illustrate this point, it bears mention that Russia’s put out a one million ruble bounty (about €15,000) to anyone who captures a Milrem THeMIS unit from the battlefield in Ukraine. These types of bounties aren’t exactly unusual during war times, but the fact that this particular one was so publicized is a testament to how desperate Russia is to get its hands on the technology.

An eye toward the future

It’s clear that not only is the war in Ukraine not a place where we’ll see “killer robots” deployed enmasse to overwhelm their fragile, human, enemy soldier counterparts, but that such a scenario is highly unlikely in any form of modern warfare.

However, when it comes to augmenting our current forces with UGVs or replacing crewed aerial and surface recon vehicles with robots, military leaders are excited about AI’s potential usefulness. And what we’re seeing right now in the war in Ukraine is the most likely path forward for the technology.

That’s not to say that the world shouldn’t be worried about killer robots or their development and proliferation through wartime usage. We absolutely should be worried, because Russia’s war in Ukraine has almost certainly lowered the world’s inhibitions surrounding the development of autonomous weapons.

Wind, solar, and hydrogen: How energy will get more sustainable in 2023

EU plans to defeat China and US in clean tech battle