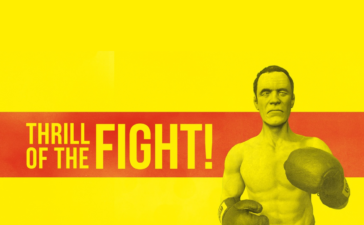 The Thrill of the Fight is a VR boxing simulator that is exhausting in all the right ways. Warm up in the gym, enter the ring, or box ghosts and zombies to get your heart rate up – and let the lead out on the canvas.

Experience The Thrill of the Fight

The Thrill of the Fight by Sealost Interactive is a multi-tiered $10 VR boxing game available on PCVR and as a Quest app. I played it for this review in the app format on my Quest 2.

The game material says that you need a 6.5 ft by 5 ft play area. This is optimum, certainly – particularly if you really want to work on your footwork and experience a sense of immersion unhindered by the grid of your play area. However, the app still runs if your play area is smaller than this. I typically play in a play area more to the tune of five or six square feet without issue.

The Thrill of the Fight requires two controllers, which is kind of a shame. No buttons are required either for gameplay or to navigate menus, as we’ll see – it just doesn’t support hand tracking. The controllers don’t get in the way or break immersion or anything like that, it would just be nice to not need to worry about them – or wear the controller batteries down.

Speaking of immersion, The Thrill of the Fight supports haptic accessories. I wish that I could tell you that I had access to some to try with this review, but alas.

Now that the housekeeping (and my only real piece of criticism) is out of the way, let’s get into the ring to experience the thrill of the fight.

When entering The Thrill of the Fight, the first thing that you do is stand on a scale and look into a camera. This is a clever way of setting your height. If you want to use this game to demo VR to your friends (or even let the kids have a go at the virtual heavy bag) this is a super handy set-up. Even if you’re the only one that ever uses your headset, it only takes a few seconds. From there, you find the main menu. Navigate the main menu by holding either one of your gloved hands over the button for the activity that you want to enter. From this menu, you can reset height without leaving and re-entering the app, which is handy. This is just under the general settings menu.

The giant “Fight” button is tempting, but let’s explore some of the other game modes first. There are a lot of options for warm-ups and practices before you step into the ring. I always like to warm up with a circuit of these to mentally and physically prepare me for the thrill of the fight.

“Speed Bag” is your classic gym “peanut bag.” Practice your rhythm while an on-screen tracker shows your current rate and best rate in five-second and thirty-second hits-per-minute streaks.

“Dummy” is a human-shaped target with lit-up strike zones. The on-screen tracker shows the force of your hits, the damage it would deal in a match, the kind of strike that landed, and whether it hit a high-damage area. You can also see your best-ever hit to develop your signature move.

“Heavy Bag” is, well, a heavy bag. It works pretty much the same as the dummy. It’s easier to see targets on the heavy bag, but harder to visualize them as they would be on an opponent in the ring.

“Focus Ball” is… I don’t know what a focus ball is. It’s been a few twenty-four hours since I stepped my bare foot in a physical dojo, but I’ve never seen one of these before and I don’t know how they work. When you hit the ball it comes back at you. The on-screen tracker logs hits and “dodges” but I don’t know how to register a “dodge.”

“Extras” are seasonal opponents that develop specific skills in the ring. A pumpkin-headed opponent only takes damage from body shots. A ghost opponent tests your reflexes with superhuman speed. A zombie that doesn’t get tired takes your endurance to the task. I’m not in the shape I once was, but I have yet to complete one of these challenges.

Except for the extras, all of these take place in a virtual gym. If I could change one thing about this game (other than hand tracking) the gym would be its own location with each practice mode being spatially navigable instead of needing to exit each to access the next through the main menu.

Now, for the thrill of the fight. Practice up on a sort of generic AI opponent as much as you want. From there, move on to a series of more colorful, storied, and challenging opponents. Start on Easy or Medium difficulty with each opponent. Beating an opponent unlocks that same opponent on more advanced difficulty levels, but it also unlocks the next opponent.

The Easy difficulty outright tells you that you have a clear advantage. The Medium difficulty is supposed to be the most realistic fight experience. After that, you might start finding yourself on the back foot more and more as your opponents become increasingly overpowered.

Gloves on in the Ring

The basic format is your classic three-round refereed match. When you hear the bell, go toe-to-toe with your opponent. Your opponent can realistically block your punches – and you can block theirs. Hits from either boxer are accompanied by a nice “thunk” sound. Your opponent also recoils from a hit. A body hit often sees them double up so you can go in for the headshot. As you hit your opponent, they visibly bruise. I swear I’ve even seen some blood fly off of my right cross, but I don’t have the screenshots to prove it. You can tell by the look on your opponent’s face when they’re getting tired. Ease back for a breather or go in hot and try for the early KO.

When you sustain a body hit, that side of your view lights up to let you know. When you sustain a solid headshot, you see a flash and your view goes gray for a moment, accompanied by audio distortion (that’s when the thrill of the fight kicks in). Make some space and block some hits, and this goes away after a moment. Otherwise, you could find yourself on the mat yourself. When someone hits the mat, the referee starts counting. Usually, they get back up and the bell rings again. But, the ref might get to ten, and then the match is over. If no one is laid out cold by the time the third round ends, it goes to technicality and unseen judges start counting points.

You can also quit a match between rounds by grabbing the towel instead of the mouthguard as the ring clock ticks down. I’ve never felt the need to quit a proper ring match between rounds, but I’ve literally sat down on the floor to catch my breath as that minute runs down.

The Thrill of the Fight came out a few years ago now. Sealost Interactive has been promising a sequel for a while. They promise that a follow-up is in development but we don’t have any release dates.

I’ve already pointed out some of the things that I would like to see from “The Thrill of the Fight 2”. While we’re making a wishlist, a multi-player version or even social leaderboards would be nice. That said, I’ve been playing this game for over a month now and I don’t see myself growing tired of it any time soon.

The Thrill of the Fight is intense and insanely good fun. It’s also definitely the most cardio that I’ve gotten since that week I tried to get into running in the summer of ‘20. When I look really hard for things about the game that I don’t like, I really just find things that I would like slightly more. All said, this game is definitely worth the $10.