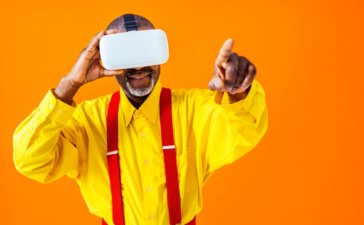 VR is a lot of fun and it can be a good way to keep moving. That’s true at any age. However, virtual reality can be a little … intense. Here, we’ll recommend some games and apps that might be the perfect introduction – or long-time favorite – for players coming to the medium a little later on.

We’ll be focusing on games and apps that move a little slower – after all, “VR sickness” can be a problem for newcomers at any age. Most of these games can also be played seated. We’ll also stay away from social experiences for now, because those can be a little … unpredictable. And, don’t worry, we try to run the gamut with titles available on Quest as well as PS VR and Steam.

Everyone should play First Steps for Quest 2. You might have thought you were too cool for this demo that comes pre-installed on the Quest 2, but you might learn something. Even if you already knew all of the controls that this little app takes you through, the dance game and target practice games are both embarrassingly fun – even for this VR veteran.

This may seem hard to believe for some, but PlayStation VR Worlds was released six years ago. At the time, it was how a lot of people had their first experience in virtual reality. And, it’s still a pretty good introduction. You might want to give the adventures a chance yourself. Some of them can be pretty hair-raising. But, some of them are pretty peaceful. The underwater adventure (the one without the sharks) is still a pretty laid-back VR experience.

From the microscopic world to outer space, to the neighbor that you never knew, Alchemy Immersive, available via Meta Quest TV, partners with world-renowned presenters and content producers to create XR versions of educational classics. Some of the experiences are 360 video, while others are full VR. Some are even mobile AR experiences that allow viewers to navigate their own experiences on a tabletop of floor space.

BRINK Traveler virtually takes viewers into volumetric captures of over a dozen of the world’s most impressive natural locations. Whether in the mobile AR version or in a VR headset, these volumetric scenes can be navigated in full six degrees of freedom. Users can even travel the wonders of the world in joint adventures with other users.

Wander is a VR classic – a port to Quest from the older Oculus Go. The app uses content from Wikipedia and Google Earth to create interactive and educational self-guided tours of just about anywhere. Virtually visit world heritage sites or places of personal significance.

Nature Treks VR is another world-exploration experience. Beautifully crafted virtual environments range from forests, to deserts and jungles, to under the waves. Players also interact with virtual wildlife, with over 60 different species roaming the various biomes.

Be aware that the biome selected may impact overall comfort level. For example, a player might not be as comfortable under water as they are on solid ground.

Real VR Fishing is very real indeed. In addition to a dedicated reproduction of the act of fishing itself, the various locations in the game are all recreated virtual replicas of real places around the world. The base game currently costs $20, but additional locations can be purchased as optional downloadable content.

GOLF+ is cut from the same cloth as Real VR Fishing. The game presents itself as “the ultimate VR golf experience” and it’s hard to argue. After all, it has a seal of approval from the PGA. The experience is built around realistic physics and virtual recreations of real golf courses. Incidentally, GOLF+ is also a partner of Ready Player Golf, a virtual reality charity event that takes place each year.

Bait! is another VR fishing game but this one is free. Well, there are optional in-app purchases including expansion packs. But, the basic gameplay is free. Upgrades like new rods, reels, and bait are purchased using an in-game currency that players earn throughout the game. The plot of the game: you are employed by a museum in pursuit of rare fish and it’s your job to catch them. The graphics and interfaces are more stylized than in other games like Real VR Fishing, but the gameplay is surprisingly intricate. Don’t get your reel rhythm just right and your hand slips. Fight the fish too hard, and your line breaks.

Real VR Fishing is to GOLF+ as Bait! is to Walkabout Mini Golf. This game focuses less on realism and more on a fun experience. The physics on the ball are accurate (as they must be in mini golf) but the courses in the game are often otherworldly. That’s true literally – the game recently released a course based on the fantasy film Labyrinth.

For another spatial version of a classic pastime, Puzzling Places is a virtual reality puzzle app with 3D pieces. Each of more than a dozen puzzles is a digital miniature version of a real location from around the world.

The puzzles come in “packs” so that you can buy them thematically to fit your taste – or buy them all as you need new challenges.

Quill the mouse is the hero of the two-part Moss series. Quill fights baddies, solves puzzles, and gets into trouble. It could be a little disorienting at times except for one key feature: you don’t play as Quill. Instead, you watch Quill as he goes through his adventure while you manipulate the world around him to get him where he needs to go.

In addition to being exciting and stimulating while remaining easy on the stomach, Moss is a beautiful game without uncomfortable content or images.

ASTRO BOT: Rescue Mission has a lot of the same gameplay and graphic elements that lands Moss on this list, but it’s more sci-fi than fantasy. Cartoony characters and comfortable viewing make this action game more palatable despite a faster pace.

Supernatural is a fitness app that takes the “live trainer” model that’s worked so well in non-VR fitness and makes it more immersive. Some of the exercises like the boxing exercise or the rhythm game “Flow” might be intense at first, but there are also the more laid-back meditation and stretching activities. Other elements include fitness tracking, leaderboards, and more. Supernatural was even championed as a good app to get older users moving during Meta Connect this year. It was also announced that knee strikes are coming to the boxing exercise.

From documentaries, to workout apps, to simulations, to classic sit-down adventure games, virtual reality isn’t just shooting games. However, an ocean of content rife with high prices and technical concerns can make getting into VR difficult for anyone, not just seniors. Hopefully, this list will help you explore virtual reality, or introduce it to someone close to you.