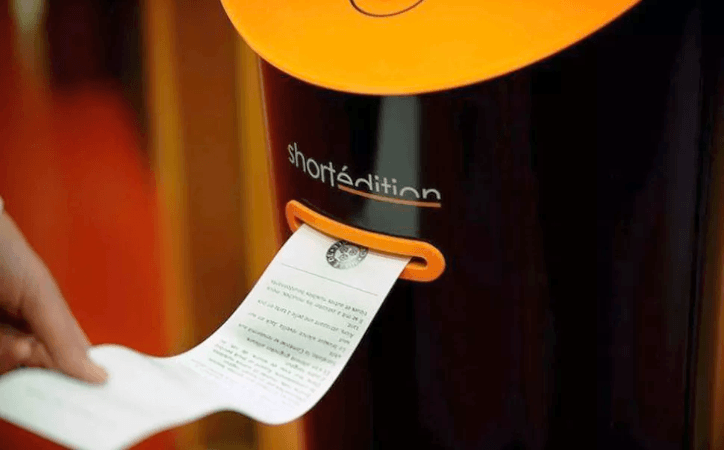 At any given moment our phones have access to nearly all of the world’s knowledge, literature, history science. Despite such rich resources, many of us opt to kill time by scrolling through social media, messages or random videos. The French company Short Edition is out to change how we spend our time waiting with its Short Story Dispenser.

Inside a conference room at the Mandalay Bay hotel, I got to see the Short Story Dispenser in action as part of CES. It is a slender waist-high cylinder with an illuminated plexiglass sign on top that simply reads, “Select your reading time.” It would easily look at home in an interactive exhibit at a museum.

The top of the dispenser is adorned with three shiny metallic buttons labeled “1 min.,” “3 min.” and “5 min.” You press the button for the length of story you want and within moments an original short story is printed on a piece of thick paper about the size of a long receipt. Best of all, the story is free.

The idea of a machine that serves up books or magazines is nothing new. But the appeal of the Short Story Dispenser is how its simple premise immediately captures your curiosity. There is an unexpected delight interacting with the dispenser. The real charm comes from the stories. After I read the story that was printed, I immediately handed it to a co-worker who in-turn read it and shared it with someone else.

The publisher Short Edition envisioned the machine as a way to share the work of its authors to a wider audience. It has been in use in France since 2016 where it can be found in train stations, airports and hospitals.

Watch this: Short Story Dispenser prints you a great read with a… 1:06

Loïc Giraut with Short Edition explained that the hope for the device was to save reading by bringing literature to unexpected places. It’s being sold to business owners and governments. The Short Story Dispenser accesses curated stories from Short Edition’s platform via the internet. In France, that platform includes over 85,000 short stories. It’s also worth noting that authors get paid every time one of their stories is printed.

Short Edition curates its stories for the audience where the dispenser is located. For example, the Columbus School District in Ohio bought dispensers for elementary schools and the stories it prints are from a catalog of children’s literature.

Filmmaker Francis Ford Coppola was so impressed with the Short Story Dispenser that he ordered one for his Cafe Zoetrope in San Francisco. He has since become an investor in the company.

The Short Story Dispenser is in the process of rolling out to the US this year. But until you encounter one in-person, you can check out some of the stories on Short Edition’s website.

The HyperDrive Is The One Dongle To Rule Them All

Deal Of The Day: Pay What You Want, Learn to Code 2018 Bundle