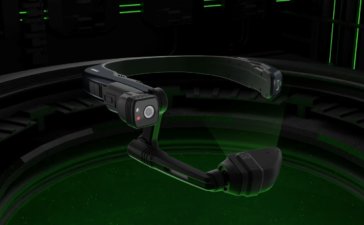 RealWear’s Navigator series of enterprise “assisted reality” headsets just got bigger. The company recently announced the Navigator 520, an updated version of the series flagship model released just over a year ago.

Improvements Due to New “HyperDisplay”

The RealWear Navigator 500 launched in December of 2021 and it does what it was designed for well. But, in XR, doing something well is seldom used as an excuse not to improve. As a result, you have to look pretty closely to notice the differences between the 500 and the recently announced 520. At least, looking at it from the outside.

Looking at side-by-side product images, you can notice that the Navigator 520 has improved eye relief – that is to say, that the screen is farther from the wearer’s eye. In industry settings, this means that users can see more of their surroundings while still getting what they need on the display. It also improves eye comfort, which is important in a device designed for all-day wear. Of course, RealWear didn’t just move the same display and called it a new product. The company was able to improve eye relief by improving the display itself. The Navigator 520 features the company’s new HyperDisplay technology integrating a larger eye box and a higher-definition screen with brighter colors.

“With the launch of RealWear Navigator 520 we’ve continued to put ourselves in the shoes of a modern frontline professional who wants to stay connected and empowered,” RealWear Chief Product Officer Rama Oruganti said in a release. “This product brings together a year of major improvements and innovations on the RealWear platform.” The hardware similarities are a benefit to the Navigator 520, as the modular device is compatible with a number of components and accessories already developed for the Navigator 500, including the voice-operated thermal camera announced by the company in November 2022.

Is Upgrading to the Navigator 520 Worth It?

Whenever an updated version of a standby comes out, there are two natural responses: excitement and skepticism. Is it worth updating to the 520 if you already use the 500? Is the 520 worth the extra money while the 500 is still available for less?

There are demos that simulate the 520’s resolution difference behind the HyperDisplay link above so you can get an idea of the display changes. It’s also worth asking whether your particular use case would benefit from improved eye relief. Are long shifts and situational awareness pain points in your particular situation?

It’s also worth remembering that given the cross-compatibility between the two devices, upgrading from the 500 to the 520 doesn’t necessarily mean that you have to replace any modules, accessories, and mounts that you may already be using. What is the cost difference? The Navigator 500 is $2,500 and the Navigator 520 is $2,700. If you’re looking at getting started with RealWear, the difference may be negligible given all of the improvements of the newer model.

If you already have a fleet of 500s, replacing them all could be rough. However, replacing 500s with 520s as needed might be the way to go given component compatibility. And, after all, one year seems to be becoming the standard XR product cycle these days. RealWear headsets are built to last, but that doesn’t mean that the specs were never going to go out of date.

RealWear is keeping up with the trend in XR wearables these days, namely releasing new devices while the previous generation still has a shelf-life. While this can be frustrating when it means replacing whole fleets of units, the Navigator 520 in RealWear’s product structure provides flexibility for users at different stages of device deployment.

The Thrill of the Fight Quest 2 Review