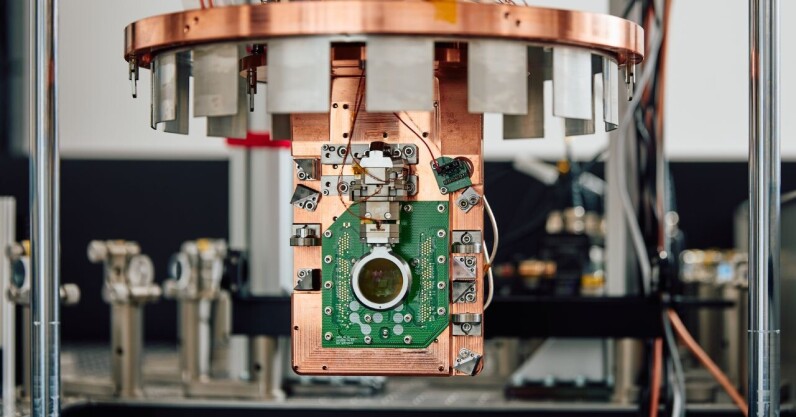 Quantum computing has immense potential but incredible complexities. While zealots claim it will cure cancer and save the planet, critics warn their promises are far from being fulfilled.

One of their key challenges lies at the very heart of the field: ​​quantum bits, or “qubits.” These information units are the quantum analog of binary bits in classical computers. To make quantum computers useful, the qubits have to be reliably controlled and manufactured at scale.

It’s a requirement that still confounds the world’s leading computer scientists. The likes of IBM and Google made impressive strides by building qubits into their quantum chips, which have to obey the laws of quantum physics at temperatures near absolute zero.

One issue with this approach is t it requires million-dollar refrigerators. Another is that just a single atom in the wrong place on the chip can cause computing mistakes.

Oxford Ionics, a startup based in the UK, applies a different technique. The company uses a proprietary technology called Electronic Qubit Control (EQC) to control the qubits. This system applies different voltages and currents on a traditional microchip, which create magnetic fields in the surrounding space.

The quantum bits in this system are comprised of individual atoms. In their natural state, these atoms don’t tend to stay still long enough to perform a computation. To stabilize them, one of their electrons is removed to make an ion. These ions have an electrical charge, which enables the electromagnetic field to “trap” them less than a hair’s width above a chip.

“We have perfect qubits.

Dr Chris Balance, who co-founded Oxford Ionics in 2019, compares the effect to toys that use magnets to suspend objects in the air.

“This gives us the best of both worlds: we have a chip that can be made just like a normal computer processor and which can run at room temperature, and we have perfect qubits made from single ions hovering above the chip,” Balance tells TNW. “Not building the qubits means we can’t build them wrong. Nature guarantees each individual atom is perfectly identical to any other.”

Unlike other “trapped-ion” exponents, Oxford Ionics doesn’t rely on lasers to control qubits. According to Balance, laser-controlled devices are effective for small systems, but extremely difficult to fabricate and integrate at chip scale. They also become error-prone as the size of the processor and the number of qubits grows.

In tests, the Oxford Ionics system has shown seemingly superior results. The ​​technology currently holds a range of records for quantum computing performance, speed, and error rates, Ballance’s research was also cited in the scientific release that accompanied this year’s Nobel Prize in Physics.

These achievements have caught the eyes of investors. Last week, Oxford Ionics announced that it had raised £30 million in Series A funding, which will be used to grow the team and bring the tech to market.

“We are entering the discovery phase.

“Over the next few years, we are entering the discovery phase of quantum computing: up to now we have not had quantum computers that solve problems we can’t solve any other way — now we do!”

“Think GPUs alongside CPUs,” he says.

It may likely still take years for killer apps to emerge, but Oxford Ionics could push quantum computing closer to the mainstream.

Here’s how we can make gadgets more sustainable in 2023