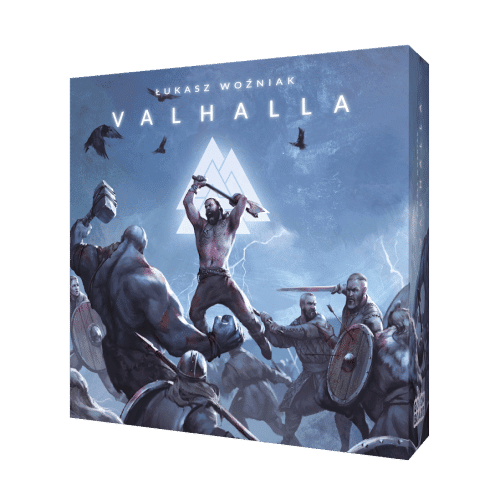 CLICK HERE TO CHECK OUT THEIR KICKSTARTER WHICH WENT LIVE 4 MINUTES AGO!

One sunny day in August Łukasz Woźniak (whom I had never spoken to before) reached out to me via email with a game he had designed. I’ll be honest, when I read the name Valhalla(written in the email) I was unimpressed. Too many games have fallen short in the Viking category, and to be so bold as to have a one-word name that carries so much history and weight behind it didn’t excite me either.

Then I watched his (private) video pitch covering the game: I was instantly hooked.

I responded that I was interested, and eagerly awaited the game’s arrival…

When I opened the box, I got even MORE than what I expected. This is literally the coolest unboxing of any game I’ve ever received. And that’s saying a lot. Lukasz clearly put a LOT of love, design, and business sense into this. It was clear he knows what he’s doing designing games: creating an experience.

I didn’t get the game to the table immediately, but I did have a chance to thumb through the components. The art in this game is STELLAR. This game has variable player powers in the form of Jarls (pronounced YARLs). The base game comes with 25 of them. Below are the 6 recommended for your first game (with the diamond in the upper right corner) and 2 for games with 3+ players. The expansions add even more Jarls, and I assume if the Kickstarter gets overfunded there may be some more as Stretch Goals / Add-ons!

Next, we’ll look at some fierce Warrior cards from the game. They are the Bear Clan, Frost Giant, and Deer Clan (from left to right). The base set also has 2 more clans: Wolf and Boar. The expansions ad Fire Giants, Valkyries, and Dwarves. Plus, there are even more lined up as stretch goals, which you can vote on in the Facebook Group!

The upper left icon is their Strength and Clan color. Beneath that is their Special Features (if any). The framed icons below that are the Weapons (dice) needed to activate the Warrior during an Attack. The bottom left is their Glory Points, which are the victory points you acquire through the game. The Warriors Glory Points are only gained if they make it to Valhalla(your discard pile). This may sound counter-intuitive, racing to get your card in your discard pile, but it is the element that truly makes Valhalla feel like a bloody battle for glory.

Another cool element of the art is their reuse of illustrations between cards of the same Clan and Strength. Below is a Deer clan Warrior of Strength 5, but one wields an axe, sword, and shield while the other carries a bow, spear, and shield.

PRO TIP: DIVERSIFYING YOUR WEAPONS ON YOUR WARRIORS IS THE KEY TO VICTORY!

When you make your first roll, it’s much better to have options as far as activating the Warriors rather than trying to roll all Weapons of one type or another.

Now, this isn’t just some Yahtzee reskin with badass Viking art on it. This is a well thought out game of attrition through strategic decisions. And unlike games that lean too heavily on chance, this one has Tactics cards to help you mitigate bad rolls, or create favorable scenarios for activating your Warriors.

And for those who love their minis, the King of the Hill expansion includes an awesome Frost Giant miniature!

There are even more components to this game, but I wanted to leave SOMETHING for you to discover. Below is an explanation of the game from the publisher, Go On Board, and the history of how Valhalla came to be. I hope you enjoyed my preview / review and look forward to hearing your thoughts in the comments below!

Overview of the game:

Valhalla is a 1-6 players card game with a dice-placement mechanics. Set in the Norse mythology, Valhalla puts You right in the battlefield, where You lead a team of warriors and fight other players.

In Valhalla You manage a hand of cards, build a team on the table, and battle using custom weapon dice. Player turn consists of one each action, followed by drawing 2 cards and picking 1 of them. The game flows smoothly giving players a lot of decisions with a simple set of rules.

The core of the game are the player vs player battles, where players use custom weapons dice. Battles are dynamic, exciting and allow for a lot of tactical decisions. In the battle, the attacking player roll the dice, assign them to the warriors and use rerolls and battle-tactics to help their attack. After the attack, defender has a chance to respond and the battle is over.

Scoring is one of the innovative mechanics, where the winner of the battle sends his activated warriors to Valhalla. They were proven worth of Valhalla and give the player Glory Points. So the players build their team, try to win the battle, and get points for warriors sent to Valhalla. There is no snowball effect and warriors on the table change all the time.

How the game came to life:

Valhalla is a result of a 3-year design and year-and a half of development. Łukasz Woźniak, the author of the game, has 11 games published (King and Assassins being one of the most recognizable), and Valhalla is his second self-published game.

Valhalla was an idea to combine a card game with a dice game, where the player battles will be center point of the game. The design process helped streamline the game to a simple, yet deep and exciting title. It brings a lot of fun and interaction to the table, straying away from a negative player-interaction.

Even though the rules for the game are simple, the game consists of a huge number of cards and vast replayability.

Valhalla had a tremendous success on zagramw.to – a board game crowdfunding website that debuted in Poland this January. The game gathered over 2700 backers, reaching 1055% of the base funding goal. Due to that large community of backers, the game reached around 30 stretch goals, expanding the base game for Polish edition.

The Polish edition of the game is ready, and is being shipped right now to Poland. Now Go on Board is looking for support to publish Valhalla globally. The Kickstarter campaign will launch in October, and all of the expansions unlocked in the Polish campaign will appear as the game content from day 1.

Where do you find out more?

Check out their Kickstarter

Check them out on BoardGameGeek