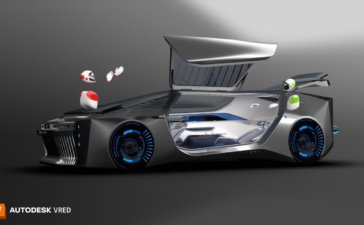 XR technology is evolving quickly. Today, millions of people use AR and VR as they go through their daily lives. While many of the popular use cases of AR and VR are still in the realm of gaming and entertainment, other industries are finding practical use cases unique to their sectors.

Developments in extended reality are expanding from innovating hardware to elaborating experiences through advanced technologies and accessible systems. In October, tech giants NVIDIA and Autodesk announced the official launch of NVIDIA CloudXR and Autodesk VRED on Amazon Web Services (AWS), a cloud computing platform for users to run their choice of applications and software.

The joint NVIDIA-Autodesk release is available as a “Quick Start” deployment system on AWS. Virtually, any user has access to leverage Autodesk VRED with the powerful NVIDIA CloudXR infrastructure. Embracing a collaborative environment of manipulating and designing high-fidelity immersive XR experiences on the cloud hastens the design workflows of industry professionals. In addition, it advocates accessible extended reality environments, accelerating the adaptability of XR technologies.

The world’s first virtual reality (VR) machine was built in 1956 (and patended in 1961)—the Sensorama was a movie booth incorporating 3D, audio, and video with a vibrating seat for an immersive viewing experience.

Inspired by the Sensorama came the development of the world’s first VR headset in 1961. The Headsight headset was built for military operations, complete with motion tracking technology. By 1968, the world witnessed the creation of the first augmented reality headset. Invented by Ivan Sutherland, a Harvard professor, the Sword of Damocles set the blueprint for generating present-day immersive AR experiences.

The long and exciting evolution of XR has yet to reach its turning point: becoming accessible for mainstream use. The general public has yet to have firsthand experience of using extended reality technologies.

The World Economic Forum states that user experience is pivotal to the mainstream success of many technologies, including XR and the metaverse. For now, the target demographic is strongly engaged in 2D platforms, sharing and communicating content in 2D format. Web3 developers have yet to devise a solution for users to relay their immersive experiences to one another.

The Significance of Collaboration for Globally Immersive XR Experiences

The joint decision of NVIDIA and Autodesk to launch their technologies as a “Quick Start” option on AWS is a step forward toward closing the gap between extended reality technologies and mainstream use. Users can now execute NVIDIA CloudXR and Autodesk VRED to create high-quality and immersive XR experiences, anytime, anywhere.

Autodesk VRED is a 3D visualization solution that professionals in the architecture, engineering, and construction (AEC) industries are familiar with. VRED users design dynamic presentations and interactive environments with real-time 3D assets.

Anyone can easily access these technologies via AWS Quick Start. VRED users can maximize designing and streaming immersive XR experiences with the support of NVIDIA CloudXR with dedicated NVIDIA RTX graphic cards and virtual workstation platforms.

The collaborative effort between Autodesk and NVIDIA did not come out of the blue. In fact, NVIDIA has been sealing partnership deals with various tech and automotive firms to scale extended reality in industrial action.

For instance, NVIDIA collaborated with automaker BMW to showcase a digital twin of the brand’s car assembly system. This summer, both NVIDIA and Autodesk collaborated with Lenovo and Varjo to bring Porsche Mission R to life with AR and MR demo.

Germany-based infrastructure company Siemens engaged with NVIDIA to leverage extended reality technologies and the metaverse for the production and manufacturing industries. NVIDIA Omniverse enables digital twin design and simulation of workflows in factories.