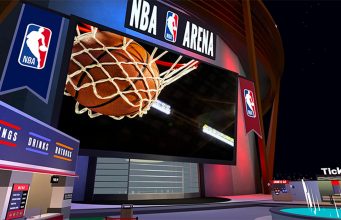 The National Basketball Association (NBA) and Meta announced they’re extending a multiyear partnership which is set to bring a few new ways for basketball fans to enjoy NBA League Pass games on Quest.

First signed in 2020, the deal essentially made Meta (ex-Facebook) an official marketing and VR headset partner of the NBA, Women’s NBA (WNBA) and NBA G League.

Now, with the extension, the companies are set to bring a new space to Meta’s Horizon Worlds platform called the ‘NBA Arena’, which will play host to live NBA League Pass games in VR throughout the season.

At some point Meta is also set to roll out NBA-licensed apparel in its Avatar Store so fans can support their favorite NBA or WNBA teams. Avatar apparel also spans avatars on Facebook, Instagram, and Messenger in addition to Horizon Worlds.

Here’s a look at the preliminary game schedule for the NBA Arena:

Check out all of the VR-accessible NBA games up to April 9th here.