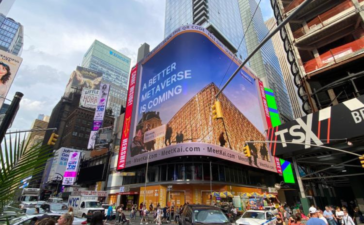 MeetKai has been around since 2018 but some of its first publicly enjoyable content hit the streets a few months ago. Now, the company is releasing a suite of software solutions and developer tools to help the rest of us build the metaverse.

From Innovation to Product

ARPost met MeetKai in July 2022, when the company was launching a limited engagement in Time Square. Since then, the company has been working with the Los Angeles Chargers.

“The purpose of the Time Square activation and campaign was really to test things out in the browser,” CEO and co-founder, James Kaplan, said in a video call. “With 3D spaces, there’s a question of whether the user views it as a game, or as something else.”

Those insights have informed their subsequent outward-facing work with the Chargers, but the company has also been working on some more behind-the-scenes products that were just released at CES.

“We’re moving from an innovation technology company to a product company,” co-founder and Executive Chairwoman, Weili Dai, said in the call. “Technology innovation is great, but show me the value for the end user. That’s where MeetKai is.”

Build the Metaverse With MeetKai

At CES, MeetKai announced three new product offerings: MeetKai Cloud AI, MeetKai Reality, and MeetKai Metaverse Editor. The first of those offerings is more in line with the company’s history as a conversational AI service provider. The second two offerings are tools for creating digital twins and for building and editing virtual spaces respectively.

“The biggest request that we get from people is that they want to build their own stuff, they don’t just want to see the stuff that we made,” said Kaplan. “So, we’ve been trying to say ‘how do we let people build things?’ even when they’re not engineers or artists.”

Users of the new tools can use them individually to create projects for internal or outward-facing projects. For example, a user could choose to create an exact digital twin of a physical environment with MeetKai Reality or create an entirely new virtual space with MeetKai Editor.

However, some of the most interesting projects come when the tools are used together. One example of this is an agricultural organization with early access to the products that used these two tools together to create a digital twin of real areas on their premises and then used the Editor for simulation and training use cases.

“AI as an Enabling Tool”

The formula for creating usable but robust tools was to combine conventional building tools like scanning and game engines with some help from artificial intelligence. In that way, these products look a lot less like a deviation from the company’s history and look a lot more like what the company has been doing all along.

“We see AI as an enabling tool. That was our premise from the beginning,” said Kaplan. “If you start a project and then add AI, it’s always going to be worse than if you say, ‘What kinds of AI do we have or what kinds of AI can we build?’ and see what kind of products can follow that.”

So the first hurdle is building the tools and the second hurdle is making the tools usable. Most companies in the space either build tools which remain forever overly complex, or they make tools that work but have limited potential because they were only designed for one specific use or for use within one specific environment.

“The core technology is AI and the capability needs to be presented in the most friendly way, and that’s what we do,” said Weili. “The AI capability, the technology, the innovation has to be leading.”

The company’s approach to software isn’t the only way they stand out. They also have a somewhat conservative approach when it comes to the hardware that they build for.

“I think 2025 is going to be the year that a lot of this hardware is going to start to level up. … Once the hardware is available, you have to let people build from day one,” said Kaplan. “Right now a lot of what’s coming out, even from these big companies, looks really silly because they’re assuming that the hardware isn’t going to improve.”

A More Mature Vision of the Metaverse

This duo has a lot to say about the competition. But, fortunately for the rest of us, it isn’t all bad. As they’ve made their way around CES, they’ve made one more observation that might be a nice closing note for this article. It has to do with how companies are approaching “the M-word.”

Kaplan sees our augmented reality future as like a mountain, but the mountain doesn’t just go straight up. We reach apparent summits only to encounter steep valleys between us and the next summit. Where most companies climb one peak at a time, Kaplan and Weili are trying to plan a road across the whole mountain chain which means designing “in parallel.”

“The moment hardware is ready, we’re going to leapfrog … we prepare MeetKai for the long run,” said Weili. “We have partners working with us. This isn’t just a technology demonstration.”

How MeetKai Climbs the Mountain

This team’s journey along that mountain road might be more apparent than we realize. After all, when we last talked to them and “metaverse” was the word on everyone’s lips, they appeared with a ready-made solution. Now as AI developer tools are the hot thing, here they come with a ready-made solution. Wherever we go next, it’s likely MeetKai will have been there first.