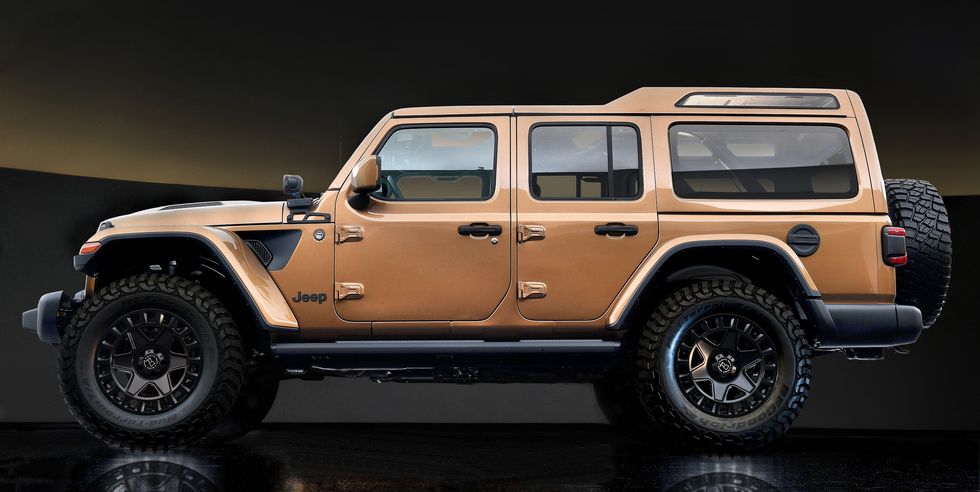 Jeep is taking a page from the Land Rover Defender’s book by creating a special stretched version of the Wrangler with an additional row of seats and a stepped roofline. This concept is called the Wrangler Overlook and is headed for the SEMA aftermarket show in Las Vegas next week.

The Overlook is based on a four-door Wrangler Sahara and features a body that’s lengthened by a foot and a raised roof at the rear that’s five inches taller than normal. This provides enough room for a third row of seats. The roof extension also includes extra windows to see the world outside from the second and third rows, while the roof remains removable and a flip-up sunroof sits over the front seats.

The interior features black Katzkin leather with bronze accents, while embroidered Jeep logos, a leather-wrapped dashboard, and suede trim class up the vibe. The Overlook’s exterior is finished in Sahara Bronze and it has a two-inch lift kit with fox shocks. Special 20-inch wheels are wrapped in 37-inch BFGoodrich all-terrain tires and there are extra off-road lights mounted up front.

While we don’t expect to see Jeep put this one-off vehicle into production anytime soon, we do think there’d be a market for a three-row Wrangler if the company decided to build one. So only time will tell if this is simply a fun idea or something that may come to fruition in the near future.

Ford Expedition Timberline Concept Is a Showcase of Overlanding Possibilities