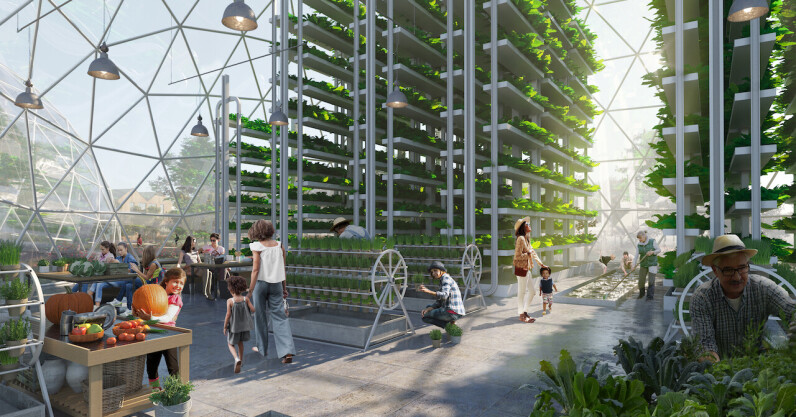 Across Europe and North America, more and more people are deciding to ditch their reliance on public utilities such as water, gas, and electricity to live and operate independently. And they’re doing so for a number of different reasons — a desire to connect with nature, be more self-sufficient, save energy, or generally live a more sustainable lifestyle are just a few.

In The Netherlands, this kind of living is increasingly seen as an attractive, and viable, option; there’s a whole thread dedicated to self-sustainable living in the r/Netherlands subreddit, and in 2016 The Netherlands became home to the first high-tech off-grid pilot eco-village developed by ReGen Villages.

“When COVID hit, almost overnight there was an exodus from urban areas. People were looking to move to the suburbs or the countryside because they wanted to feel like they could provide for themselves,” says founder James Ehrlich.

ReGen developed “Village OS” software, which not only uses machine learning to design and plan off-grid neighborhoods, but also acts as a local server, monitoring the village’s infrastructure for risks and improvements. This “digital twin” Ehrlich tells TNW, can, “understand the various nutritional flows, if you will, across the neighborhood.”

To power the eco-villages of the future, we’ll need to rethink the way we collect, use, and share energy. Watch as tech expert, Erwin van der Zande, explains how we can make energy grids smarter and more efficient.

Ehrlich knows how to develop off-grid communities that house 400-500 homes, as well as planning the different systems that come into play involving food, electricity, and water, so it’s pretty safe to say he’s an expert in off-grid living. We asked him: how can the average techie live off-grid?

When it comes to actually powering your off-grid home, there are a few different options.

First, Ehrlich tells TNW, whether you’re retro-fitting your traditional home to make it less reliant on public utilities or building an off-grid home from scratch, it’s worth looking into how you can improve its energy efficiency.

Your traditional Dutch row house, made out of brick, is an energy sieve. But by putting a south facing glazing across the back, like a little greenhouse that’s connected to the back of the home, you can improve the R-Value [or insulation] of the house overall. It generates heat that comes back into the house and creates a bit of humidity, which is really nice during the dry winters. You can grow things there, it’s a lovely place to sit, to have coffee, tea, whatever.

Perhaps one of the most common, and increasingly affordable, off-grid energy sources are solar photovoltaics (PV), or solar panels. Solar panels allow you to capture sunlight, convert it into electricity, and store it in a battery.

“Solar voltaic is something that a lot of people use as a supplement to power their home, but also as a means to power their electric vehicle,” Ehrlich says. “There’s various companies that have this kind of battery storage now, so the technology is going to get better and better. This means [people living off-grid are] able to reduce their overall energy usage.”

But solar panels aren’t the only option, and also aren’t the best one for regions that don’t see a lot of sunlight (ahem, the Netherlands).

“People who live in a moderately windy area could put up a small wind turbine that doesn’t vibrate and doesn’t make a lot of noise,” Ehrlich says. “They’re a little more expensive, and the efficiency isn’t quite there yet, but they’re getting better. The point is they can be a supplement to battery storage when you don’t get much sun.”

If you’re considering wind turbines, it’s worth looking through local government guidelines, like the U.S. Department of Energy’s checklist, which asks questions such as whether your area gets enough wind, if there’s enough physical space around you, and if towers are allowed in your area.

“Wind turbine technologies are getting better, smaller, blade free, and noise free, and are easy to fold up in case of storms or bad weather,” Ehrlich says.

Electric vehicles themselves can also be used as power sources by acting as bidirectional chargers. Many EVs, including several Kia models, are V2D-enabled, which means they act as large batteries that can power electronic devices using an internal or external socket.

Living off-grid can also extend to creating a self-sustaining food source. In fact, one of the earliest inspirations for ReGen Villages came from Ehrlich’s encounter with a biodynamic farming community.

I stumbled upon this lovely community in Northern California of organic, biodynamic, small plot family farmers and started to learn about eco villages. These wonderful, small communities had essentially cobbled together passive home technology connected to heat exchange with early solar PV panels, solar thermal, and other things like bio waste, anaerobic digestion, biomass, and biogas. I was really just blown away by the resiliency these measures are able to sustain and by the delicious food that was being produced on site.

For ReGen Villages, Ehrlich has developed a system that relies on, “a combination of non tilled soil farming, with at least one to two meters of good topsoil [and] permaculture, which essentially creates a completely edible neighborhood. You replace, wherever possible, the foliage with things that you can eat.

Over a period of time these orchards and food forests really start to produce and over produce. We marry that with controlled environment farming, either heated greenhouses or non heated greenhouses, depending on where we are in the world. In addition, we also include aquaponic and aquaculture systems, freshwater shrimp, and several different species of fish.”

Boiling water is slow and inefficient considering how much you need on a daily basis.

For an individual looking to move off-grid, but not join an eco village, Ehrlich says the same principles apply: “We strongly recommend that people replace their lawn, wherever possible, so that it can be food bearing.” This also has a profound social impact. “If enough people do it, you start to have this dialogue with your neighbors about what you’re producing, what you have extra, and what they have extra. We see that in our community.”

Ehrlich also mentions “light animal farms,” such as chicken coops, a single cow, or smaller herds and flocks of sheep, goats, and turkey — and not just as a food source.

The animal waste is actually a food and nutrition source for vermiculture. Anaerobic digestion kicks in. You also get heat and energy from anaerobic digestion produced by compost piles. In addition to that, black soldier fly larvae and aquatic worms eat their own weight every day in food and animal waste. They then become the perfect food for the chickens, fish, and other small animals. So it’s really an amazing circle of life.

For individuals looking to go off-grid, there are traditional composting methods, but the past few years has also seen a swathe of smart composting consumer tech that’s far less smelly, and can be brought inside or into urban environments.

Having access to clean water is an incredibly important aspect of off-grid living and, well, basic survival.

While boiling water can help purify water, it’s slow and inefficient when considering how much water you need to stay hydrated, bathe, and more on a daily basis.

There are plenty of consumer-facing water filtration systems that remove viruses, bacteria, and pathogens, at all different price points. Several blogs about off-grid living have reviews of various water filtration methods and hardware.

As Ehrlich points out, a lot of these off-grid systems and technologies have actually been around for a long time:

When my father was a kid in the early 30s, he vividly remembered electric vehicles in New York City being used to deliver ice, and as taxi cabs and small buses. But there were very powerful interests that didn’t want to see people potentially generating their own power, running their own vehicles, and having no need for oil changes, tuneups, etc.

“You never change things by fighting the existing reality. To change something, build a new model that makes the existing model obsolete.”

As consumer hardware continues to evolve, and communities like ReGen Villages make off-grid living increasingly normalized, an off-grid future is not as far out of reach as we may think.

Rail Baltica is the sort of infrastructure project every continent needs