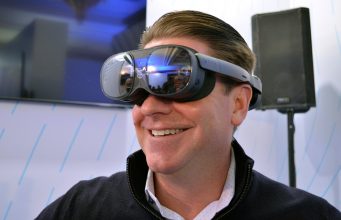 At CES 2023 HTC revealed its new Vive XR Elite headset which is positioned as a Quest Pro competitor. In terms of features and hardware, the headset is largely a refinement of formfactor over anything else; and while it’s undoubtedly compact and lightweight, it may be hampered by an unclear value proposition and some ergonomic details that went overlooked.

For a detailed look at Vive XR Elite’s specs and features, check out our announcement article

Everyone’s head shape, nose size, and eye positions are different. That said, the first time I put on Vive XR Elite it was clear to me that there wasn’t nearly enough room for my nose… something that I have no issue with on almost every other major headset on the market (even HTC’s other VR headsets).

It’s not that it’s impossible to get the pressure off your nose—the optional top-strap (which HTC smartly included) makes this easy enough—but the problem is that if I raise the headset up to get weight off of my nose, my eyes are no longer in the sweet spot of the lens, making the view through the headset sub-par. More padding around the nose would have a similar issue of moving the lenses out of the sweet spot.

While I didn’t get to use the headset for an extended period of time, I have a strong suspicion that the nose thing is going to be a literal and figurative pain point on this headset. And as someone who doesn’t have a particularly large nose, I can’t imagine I’m going to be the only person with this issue.

The nose thing isn’t the only ergonomic oversight that was immediately apparent. There’s also the fact that the rear pad, which is designed to cup the back of your head, doesn’t cushion your head enough to prevent contact between your skull and the battery on the back. That means that as you tighten the headset you can feel a big, flat, plastic surface pushing against your head. That’s compared to something like the Quest 2 Elite Strap (which the rear of Vive XR Elite appears to emulate), where I can only feel the pads hugging the back of my head, but never the battery behind them.

Beyond these worrying ergonomic subtleties, the headset’s fundamentals feel solid across the board, making the Vive XR Elite the company’s most refined standalone to date. But from a feature and performance standpoint, the headset feels more like Quest 2 than Quest Pro, which puts it in an awkward place with its $1,100 pricetag.

Visually, Vive XR Elite’s pancake lenses are pretty good on the clarity front, with good edge-to-edge clarity, though falling short of the excellent lenses on Quest Pro. The use of non-Fresnel lenses means a reduction in glare and god rays compared to Quest 2, though the resolution and visibility of the screen door is about the same between the two headsets (1,920 × 1,920 vs. 1,920 × 1,832). And while the peripheral field of view feels a little tight, the added dioptre control (for changing the focus of each lens) will be welcomed by those with glasses, and even those without will be served well by the continuous IPD adjustment (which includes an on-screen measurement readout and calibration pop-up).

Inside-out head-tracking feels pretty good and is surely ‘good enough’, though the instantaneous rotational latency doesn’t feel as tight as Meta’s bar-setting inside-out solution. Importantly, the tracking feels better than Vive Flow, which in my experience has too much latency for long-term comfort. Controller-tracking on Vive XR Elite also feels solid, and with cameras on each side pointed almost entirely to your left and right, coverage ought to be good (potentially surpassing Vive Focus 3).

As the name implies, the HTC is pushing the XR Elite as a headset that does passthrough AR in addition to VR. The headset’s color pass-through view isn’t stellar. Similar to Meta’s headsets, the XR Elite attempts to rebuild the depth of the real world virtually to provide geometric correction and depth cues, but even with a depth-sensor on-board (which Quest Pro lacks), my experience with the headset’s passthrough AR showed a lot of warping due to incorrect depth-mapping.

Without being able to do a direct side-by-side comparison, my impression was that XR Elite wasn’t quite as sharp as Quest Pro when it comes to passthrough AR. Granted, the passthrough AR on both headsets headsets is definitely in the same approximate ‘class’ (not sharp enough to read text from your smartphone and quite poor dynamic range at that).

Just like with Quest Pro, the quality and application of passthrough AR feels entirely undercooked, with the handful of AR apps I tried on the headset not sufficiently answering the question ‘why AR?’. But now that another headset on the market is embracing and enhancing this capability, perhaps the answers to that question will come a bit sooner.

Considering its performance and features, Vive XR Elite seems to share the same core problem as Quest Pro—and that’s the value proposition. Even if we ignore any potential ergonomic mishaps… at best Vive XR Elite is akin to a somewhat more compact version of Quest 2. And even if we ignore that Quest 2 has a much more extensive content library… it’s difficult to see how, for most people, Vive XR Elite can justify an $1,100 price tag compared to Quest 2 at $400.