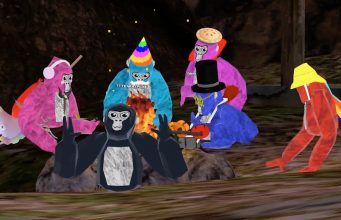 Gorilla Tag is undoubtedly a hit. Its primate-centric locomotion style and infectious game of tag has vaulted it into the top spot as the most-rated game on the Quest Store, surpassing even the Meta-owned rhythm game Beat Saber. Now, the indie team behind Quest’s most popular game revealed they’ve generated over $26 million with Gorilla Tag.

Speaking to VentureBeat, developer Another Axiom has reported that its gorilla-themed game has not only brought it home big with $26 million from in-app purchases, but it’s also attracted a larger glut of players than previously reported.

Having initially launched on App Lab in March 2021 and later released on the official Quest Store this past December, devs behind the free-to-play game say it’s managed to reach a peak monthly active user count of 2.3 million now. On Christmas, which is when Meta typically sees a big influx of users, over 760,000 users played Gorilla Tag.

It is free-to-play on Quest—its biggest platform—although a paid Steam Early Access version is available as well for PC VR headsets, costing $20, which comes along with an equal value of its in-game currency, shiny rocks.

Therein lies Gorilla Tag’s monetization strategy, as in-app purchases include a range of cosmetic items such as hats, glasses, and seasonal items like Santa beards and candy canes.

Developer Kerestell Smith told Road to VR last month that its main driver to get players in the door (and spending cash) was via some well-timed virality on TikTok, with the hashtag #gorillatag seeing 4.4 billion views to date.

Today, the game sits at over 52,000 reviews, ranking above Beat Saber’s 46,000 reviews, making it the most-rated game on the platform. At the time of this writing, Gorilla Tag is the fourth best-rated free game on Quest, sitting behind GYM CLASS – BASKETBALL VR, Innerworld, and First Steps for Quest 2.

Check out the full rankings from this month, which we break down into best and most rated games for both paid and free titles on Quest.