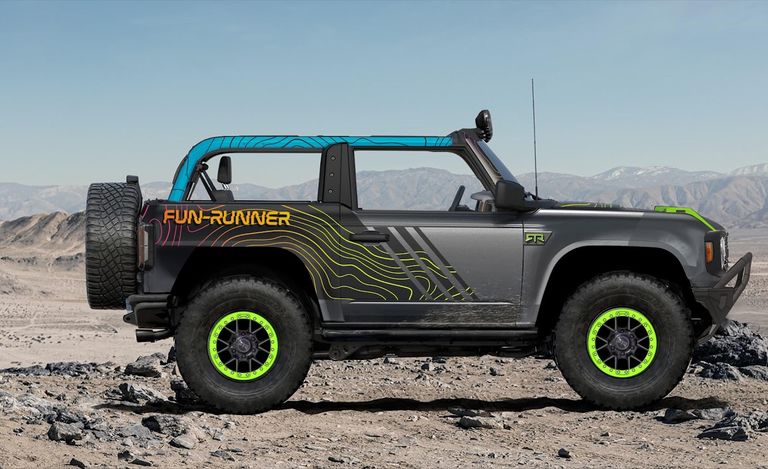 Ford is coming to Las Vegas prepared with a total of six Broncos customized by some of the most well-known brands in the aftermarket industry.

Of the six vehicles, four are based on full-size Broncos and the remaining two are based on Bronco Sports. There’s there’s an interesting mix of utility, practicality, clever design, and over-the-top modifications we’ve come to expect from SEMA builds. Ford says all of these vehicles feature parts from Ford’s own Performance division, licensed partners, and other aftermarket sources. Here’s how they all stack up against each other.

The first Bronco on the list is a fun off-road themed two-door variant powered by the 2.3-liter EcoBoost engine and based on the Badlands trim level. Customized by Vaughn Gittin Jr. and RTR Vehicles, it comes with a collection of Ford Performance and officially licensed parts, including a performance intake system, a sport exhaust, and new off-road-ready Dana axles. Behind the RTR forged bead-lock wheels and 37-inch tires you’ll find Fox Performance Elite 2.5 coilovers paired to a long-travel suspension kit.

The second Bronco to make its SEMA debut is another full-size two-door, this time based on the Black Diamond trim. Designed by BDS Suspensions, it turns the Bronco into a make-shift fire truck with an open-air rear section and bright red paint. There are CrawlTek Revolution bumpers that have recovery hooks and winches built in, as well as a skid plate up front for bashing even the toughest trails. There are Fox 2.5 PES coilovers, rear adjustable control arms, and disconnecting sway bars underneath to assist the 37-inch BFGoodrich KM3 tires in providing ultimate traction in any environment.

Next up is the first four-door Bronco of the group, based on a Badlands trim truck and customized by Tucci Hot Rods. Perhaps the most ridiculous of the group, it comes with Mattracks 88-Series quad tracks on all four corners for true go-anywhere capabilities. There’s a snowboard rack on the roof along with a light bar. Even cooler, it’s the only Bronco of the group to feature the optional seven-speed manual transmission.

The last full-size Bronco from Ford’s selection is this Outer Banks model reimagined by LGE-CTS Motorsports. Another four-door model, it uses an Outer Banks model as a base and comes with a 3-inch suspension lift, Baja Forged bumpers front and rear, an upgraded sound system, and a handful of neat aftermarket storage solutions.

The first Bronco Sport on the list is also the second car to be customized by LGE-CTS Motorsports, featuring a handful of similar upgrades. There’s a 2-inch suspensions lift, rock sliders, off-roading lights, fender flares, and upgraded front and rear sway bars. There’s also a Warn winch, tubular bumpers, and a Borla exhaust for the 2.0-liter Ecoboost engine under the hood.

Last but not least is this Badlands-series Bronco Sport customized by CGS Performance Parts. Perhaps the most subtle of the bunch, the bright red SUV still has a solid collection of upgrades making it worthy of the Bronco nameplate. There are forged wheels wrapped in Toyo all-terrain tires, bumper and hitch enhancements, rock lights, and underbody lights. The engine also gets a cold air intake and a cat-back exhaust.

3 of the Best Hoverboards Money Can Buy