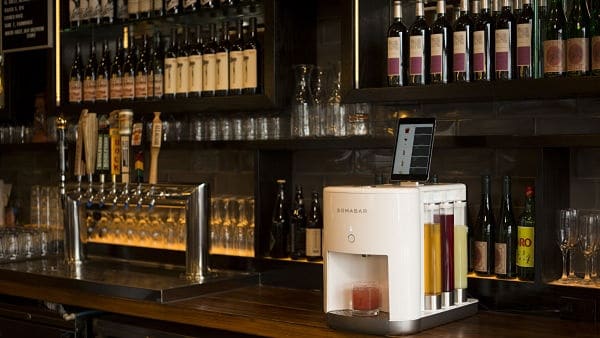 Somabar is the world’s first robot bartender created for beer and wine restaurants.

After three years of development, Somabar announced the completion of manufacturing development of its robot bartender at the 2018 Western Foodservice & Hospitality Expo, where it won Best Product of the Year. Originally crowdfunded on Kickstarter in 2015 as a consumer product, Somabar found heavy demand from the foodservice and hospitality industries where bartending has become increasingly regulated and expensive. Somabar made the decision to completely redesign its concept to be robust enough for high volume restaurants and meet sanitation standards required for all restaurants in America. Somabar was officially granted NSF certification in December 2018 allowing it to operate in all restaurants in the U.S. and began shipping its original Kickstarter backers with these commercial robot bartenders.

Why restaurants? Restaurant owners are used to working through endless regulations, but liquor licensing and rules for human bartenders are the most costly and complicated. Regulations vary by state, and costs can be dizzying, especially in areas that strictly limit the supply of licenses, usually through lottery systems. In parts of New Jersey, among the most expensive states, the cost of a restaurant full-liquor license has reached $2million.

Somabar’s goal is to help restaurants navigate this bureaucratic minefield with its robot bartender. Somabar currently operates exclusively in beer and wine licensed restaurants which typically do not have a bartender nor a full liquor license. Beer and wine licenses are unrestricted in number, can be issued in a matter of weeks and cost as little as $500. Somabar helps restaurants make the leap from serving just beer and wine to serving highly profitable cocktails. Operating under a restaurant’s beer and wine license, Somabar uses 24% ABV low-proof spirits like agave wine for traditional tequila cocktails, soju for vodka cocktails and over 20 other varietals of low-proof based spirits. The Somabar robot bartender suggests thousands of low-proof cocktails that can be made with the press of a button by any restaurant employee, including waiters and bussers, automatically and legally from the Somabar robot bartender, with virtually no bartending training required.

Somabar launched this month, following its NSF certification, with a number of restaurants near its headquarters in Los Angeles including the well-known luxury supermarket chain Gelson’s, for their new line of wine and tapas restaurants. What’s the verdict? According to Gelson’s general manager, Tony De Lucrezia, “Somabar’s low-proof cocktails have been a hit with our customers and dramatically improved our per-drink profit margins.”

AVEINE – The brand that enhances the pleasure of sharing

This Beer Gives Your Dog A Nicer Smelling Bum