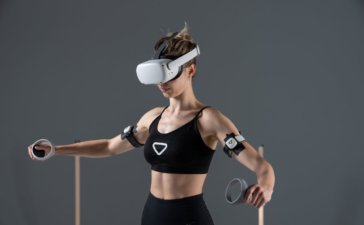 Usually, when people talk about haptics we’re talking about making interactions more realistic or immersive. Of course, this is huge for VR. However, as VR develops as a fitness tool, haptics can take on a whole new dimension. Take a recently announced product from Valkyrie Industries as an example.

I used to write for health and wellness blogs, so entertain a little physiology rundown. The two branches of this product build on two facts about your body. First, your muscles work through electrical impulses generated by your body. Second, your muscles grow by working against resistance.

As to the second point, resistance can come from an external force like gravity. This is mechanical resistance, which is the basis of most workouts. However, EMS can also provide a different kind of resistance that works out your muscles without the use of some physical source like weights or bands.

So, together, EMS doesn’t just make you feel like you’re doing something – your muscles actually get that benefit. So, what is Valkyrie Industries doing in this field?

This has two big potential benefits for VR: fitness, and general immersion. Valkyrie Industries is primarily focused on fitness, so we’ll start there.

Fitness has been a major use case of VR, primarily through cardio. To dust off my health blogger hat again, cardio is good for your heart and lungs but it doesn’t necessarily do a lot for muscle growth because it doesn’t involve a great deal of resistance. But, it’s the ideal match for VR because VR solves so many of the problems of conventional cardio.

Conventional solo cardio also tends to be boring. Switching things up requires a partner, access to specialized equipment or areas, and other obstacles. VR has largely removed these various barriers by “simming in” items, venues, and even partners. The ability to gamify these activities also makes them more attractive, particularly when paired with social features.

But it still doesn’t do much for muscle growth. Right? Valkyrie Industries recently announced Valkyrie EIR. These are bands worn around the upper arm that provide muscle stimulation to the biceps and triceps during your cardio workout in VR. This helps to bring muscle activation into cardio without incorporating weights or bands to get in the way. “The powerful feeling of resistance is integral to the best workout routines,” Valkyrie Industries co-founder and CTO, Ivan Isakov, said in a release shared with ARPost. “We wanted to push the boundaries of immersion for the millions of fitness fans that work out in VR every day. Valkyrie EIR is the next step in that journey, as we build on our expertise with haptic technologies.”

Now, let’s talk about general immersion as a potential benefit of EMS. This requires a little extrapolation from the actual Valkyrie Industries releases. But, as we saw above, EMS creates the feeling of physical resistance from a virtual activity. That is here, being used to increase a workout. It could also be used to increase immersion.

Haptics as a form of feedback is one of the great pursuits of hardware developers – usually focusing on the hands and body. However, Valkyrie Industry’s armbands only cost $150 – significantly below the price of other haptic solutions.

So, why aren’t I playing Archery Dungeon with EMS right now? There are a few reasons. First, While Valkyrie EIR was announced last month, it isn’t scheduled to ship until next summer. Second, strapping on an armband doesn’t automatically make it reactive to whatever experience you’re enjoying. That would require SDKs and APIs that we haven’t seen yet. But, it’s still early.

Plus, we know that companies like Meta are working on EMG. That’s “electromyography” – tech that detects the electrical impulses in muscles. In VR, it’s a potential input method of future devices. A headset that you communicate with through EMG input and that communicates with you through EMS haptics could have incredible potential for human-computer interaction.

Valkyrie EIR for VR fitness is exciting. The idea of Valkyrie EIR providing haptic feedback for more diverse VR applications? That’s thrilling. But that’s often the problem with emerging technologies: If we keep looking at what might come next, we forget to appreciate what we have today.

12 Exercises You Can Perform at Your Standing Desk

Among Us VR Review on Quest 2