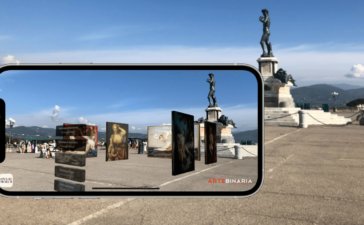 Artebinaria Open-Air Museum is a brand new technological platform – designed, developed, and curated by Artebinaria – for setting up and opening to the public a collection of imaginary museums in augmented reality, geo-locatable anywhere in the world, and visitable through the app Open-Air Museum, available for iPhone and iPad.

A series of open-air exhibition spaces come to life in augmented reality, offering an unparalleled experience for art enthusiasts, with exclusive installations that evolve over time with new proposals.

Artebinaria is a tech company based in Florence, Italy, founded by senior software engineer Alessandro Bemporad, operating internationally since 2019 in the field of augmented reality applied to the world of art. The company develops its own solutions on Apple devices and Cloud Computing platforms.

The team is composed of software engineers and art historians, all with many years of experience in their respective professional fields.

Artebinaria believes in augmented imagination – the symbiosis of creativity, knowledge, and technology.

The first three imaginary museums are already open at Piazzale Michelangelo in Florence, at Primrose Hill (The Regent’s Park) in London, and at Place-Vendôme in Paris, and offer a selection of 100 masterpieces of painting from the 13th to the 20th century.

The selection of the artworks, and the original content of the information sheets, illustrating the artworks, have been curated by an art historian, the Art Director of Artebinaria, Maddalena Grazzini.

How to Visit Artebinaria Open-Air Museum

A visit to one of Artebinaria’s Open-Air Museums takes place via the app Open-Air Museum by Artebinaria, which allows visitors who are in one of the geo-located museum locations to explore the artworks in augmented reality.

Visits to the Artebinaria Open-Air Museums are free of charge and are offered by selected sponsors, whose logos are visible in 3D directly within the augmented reality scenes. Each of Artebinaria’s Open-Air Museums is arranged in a series of ‘Pavilions’ and ‘Exhibition Rooms,’ which over time will house new thematic exhibitions.

Inside the virtual rooms, visitors can admire the artworks, displayed in life-size, as if they were hanging on invisible walls which do not conceal their surroundings.

Moving within each imaginary room, visitors can admire the artworks from any perspective. In particular, it is possible to get close to an artwork to discover all its details or touch an artwork in space to view its information sheet.

In this first edition, located in London, Paris, and Florence, the Pavilions of Artebinaria Open-Air Museum are dedicated to the themes of everyday life, portraits, mythology, and sacred art. Inside the exhibition rooms are shown 100 paintings of more than 60 great masters such as Giotto, Vermeer, Rubens, Van Gogh, Leonardo da Vinci, Rembrandt, Gauguin, Renoir, Degas, Monet, etc. Artebinaria Open-Air Museum in Your City

With the opening of the first museums without walls in Florence, London, and Paris, Artebinaria invites all art history enthusiasts to visit them, and also to propose new locations for the opening of fantastic new Open-Air Museums in augmented reality all over the world.

Why don’t you propose to Artebinaria the opening of an Open-Air Museum in your city, too?